Mid-Air Explosion Aboard Russian Airliner Possible Cause of A321 Crash 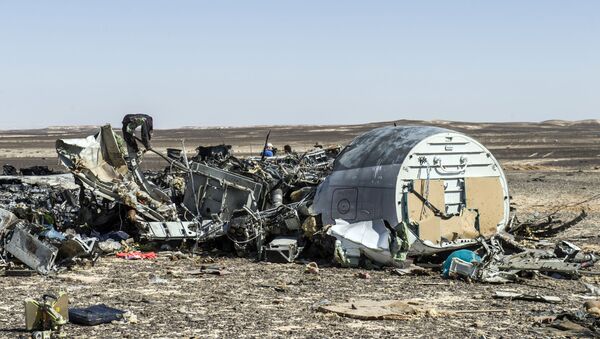 © AFP 2021 / Khaled Desouki
Subscribe
On October 31, an Airbus A321 operated by the Russian airline Kogalymavia crashed in the Sinai Peninsula en route to St. Petersburg from the Egyptian resort city of Sharm El-Sheikh.

MOSCOW, (Sputnik) – An explosion aboard the Airbus A321 passenger jet might be one of the possible causes for the plane crash over Egypt’s Sinai Peninsula, aviation experts told Sputnik on Tuesday.

"I am inclined to only one version, the explosion of a load, not the one of an individual, but inside the luggage. Especially since it detonated quickly, as soon as the plane took off, just picked up speed, it’s 20 minutes. One cannot set the bomb for more time. What if the aircraft lands and the mechanism fails to function? Those who install it are striving to make it explode in the air," a retired pilot and aviation expert, who took part in a number of aircraft accident investigations stressed.

Someone Other Than Pilot Might Have Wilfully Crashed A321
According to him, it is highly likely that the aircraft started to fall to pieces in midair because of depressurization caused by a powerful blast and serious hull damage.

Another expert, a consultant for major airlines, financial institutions and aerospace manufacturers, who specializes in aviation and airline maintenance and airline accident investigation told Sputnik that the Russian plane crash looked gruesomely, a lot like the Indonesian airliner that crashed in late December 2014.

"As a preliminary opinion, I believe that this accident is eerily similar to the accident in Indonesia of Air Asia Flight 8501. This accident occurred on December 28, 2014. The scenario appears to be nearly identical," Robert L. Ditchey stated, adding that an abnormally steep climb was reportedly a factor in causing the Indonesian aircraft crash.

Earlier in the day, the managing director at the US-based Leeham aviation consulting firm said it was premature to draw firm conclusions since only cockpit voice and flight data recording could shed light on the lead-up to the tragedy.

"We need to wait for the initial readout of the cockpit voice and flight data recorders (CVR, FDR)," Scott Hamilton emphasized.

All 224 people on board have been confirmed dead in what has become the greatest civil aviation catastrophe in Russia’s history.

000000
Popular comments
Only the CIA has assets at al-jazeera to create disinformation that "the pilot was calling Cairo to land there". This has to be investigated, together with the Turkish ATC disinformation too.