Moscow Trolleybuses Turn Out for 82nd Birthday Parade and Exhibition 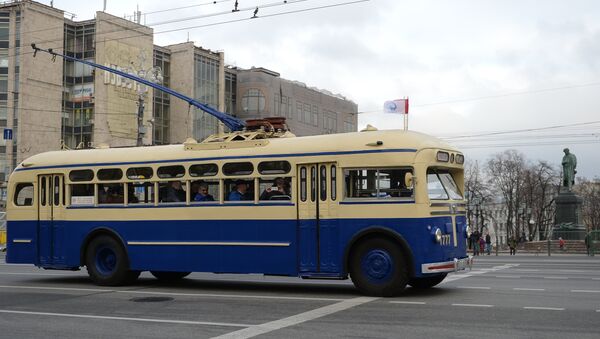 © Sputnik / Vladimir Astapkovich
/
Go to the mediabank
Subscribe
International
India
Africa
To mark the 82nd anniversary of the introduction of the vehicles in Moscow, rare trolleybus models will complete a procession through the city on Saturday, October 24, in the run up to a trolleybus exhibition on the bank of the Moskva River.

Moscow will commemorate the 82nd anniversary of the introduction of its trolleybus transport service on Saturday with a parade of rare models through the city center, followed by an exhibition on the bank of the Moskva River.

Prior to the exhibition, which began at 12 p.m. on Frunzenskaya Embankment, the trolleybus parade made its way across the city.

Enthralled city residents were able to catch a glimpse of some of the historic, preserved models of trolleybus which coursed through the city from the 1940s onwards, and other rare models usually seen only in museums across the former Soviet Union.

Visitors to the exhibition are able to take a tour of the trolleybuses, as well as see performances by actors in historical costumes, and presentations from curators of the Moscow Transport Museum on the history of the Moscow trolleybus.

"Already this year Moscow Transport has successfully put together exhibitions of historical trams, and buses. Today we are delighted to invite visitors to the birthday celebration of the Moscow trolleybus!" said Yevgeniy Mihailov, general director of Moscow Transport authority.

"The annual parade of retro vehicles is a unique opportunity for city residents to get in touch with the history of their city, [in order] to see how public transport, an integral part of Moscow streets, has changed over time," he explained.

The first regular Moscow trolleybus made its maiden journey on November 15 1933, and followed a route from Moscow's Belorusskaya train station to the village of Vsesvyatskoe, now in the Sokol region in the north of the city.

Today Moscow is traversed by 83 trolleybus routes, which are used by more than 1,200 trolleybuses each day, carrying more than 1.1 million passengers daily.