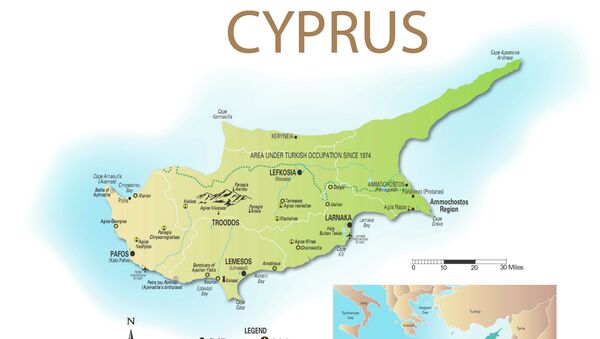 Cypriot Foreign Minister Ioannis Kasoulides said on Monday his country would not agree to lift its veto on Turkey's EU accession and that the decision would remain in force for "the reasons which still exist."

MOSCOW (Sputnik) — For a decade, Turkey and the European Union have been in talks on the country's membership in the bloc. Cyprus, still smarting from the loss of its territory to Ankara in 1974, continues to take a tough stance on the issue as its expected veto looms over EU-Turkey talks.

"I have already warned colleagues in the General Affairs Council…. on chapters 23 and 24 [of the EU acquis]. Given things currently standing, we will not give our consent [to the talks on Turkey's EU membership]," Kasoulides told the Greek state broadcaster NET.

EU Throws Money at Turkey to Stem Migrant Crisis
Cyprus, part of the European Union since 2004, was divided in 1974 after Turkey had invaded the island. The Turkish Republic of Northern Cyprus proclaimed independence a decade later, currently recognized only by Turkey. Ankara still keeps troops in the breakaway northern part of the island.

The two chapters mentioned by Kasoulides are related to the implementation of judiciary and fundamental rights as well as of the rights of justice, freedom and security, necessary to become eligible to join the bloc.

Turkey Hopes to Be in 'EU Family Photo' Soon
On Thursday, EU officials agreed to speed up stalled talks in return for Ankara's help in tackling the current EU migration crisis.

On Sunday, German Chancellor Angela Merkel visited Turkey, where she expressed support for the country's leadership in its bid to join the bloc in return for cooperation aimed to stop the refugee flow, adding she would discuss the issue with the other members of the bloc.

Negotiations over Turkey's EU membership began in 2005, but have been repeatedly deadlocked as sides failed to agree on the implementation of technical points that Ankara must fulfill to achieve standards required for EU membership.