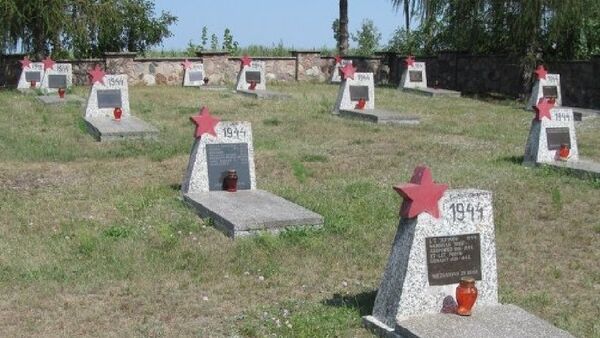 © Photo : Przemysław Woźnica
Subscribe
Poland’s interpretation of agreements with Russia on the graves and memorials of the victims of war and persecution is groundless, a Russian Embassy in Warsaw document obtained by RIA Novosti on Thursday stated.

WARSAW (Sputnik) – The document cites Poland’s recent statements that a February 22, 1994, intergovernmental agreement does not extend to territories outside military graves and falls under the jurisdiction of local authorities.

"Russia considers such an interpretation of bilateral agreements in the area of memorials unfounded," the Russian Embassy in Warsaw stressed.

The document evoked Article 1 of the agreement, saying it extended not only on burial sites, but also to sites commemorating military and civilian victims of war and political repressions.

"This means the agreement has a direct bearing on any monuments to Russian soldiers killed in armed conflicts. The agreement says nothing about a memorial object being an exclusive element of cemeteries or war graves," the Russian Embassy said.

The document further cites a Russian-Polish 1992 friendship and neighborhood agreement ensuring the protection and maintenance of cemeteries, burial sites and other memorial places.

"The Russian side hopes that Poland’s authorized state bodies will strictly comply with their obligations arising from bilateral agreements that clearly preserve the legal status of the Russian memorial heritage in Poland and that of Poland in Russia," the document stated.

Authorities in the northern Polish town of Pieniezno dismantled a monument to Soviet general Ivan Chernyakhovsky on September 17, drawing condemnation from the Russian Foreign Ministry. The statue was constructed in the early 1970s to honor the general’s 1945 death during the World War II liberation of Europe from Nazi Germany.