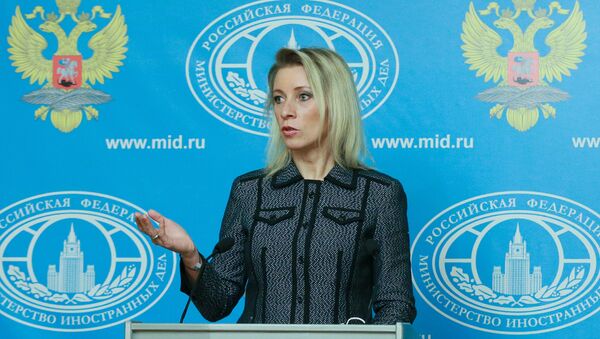 © Sputnik / Anton Denisov
/
Go to the photo bank
Subscribe
On Tuesday, the State Department said that the Dutch report “validated” the US theory that MH17 was downed by a surface-to-air missile from “separatist-controlled territory,” although the report gave no exact location of the missile system.

“The unclear babble that we constantly read has its own simple goal, on the one hand, to confuse, and on the other, to form a relevant public opinion, which, frankly speaking, is called propaganda,” Zakharova said.

On Tuesday, the State Department spokesman Mark Toner told journalists that the Dutch report “validated” the US theory that the Malaysia-bound flight carrying nearly 300 passengers was downed “by a Buk surface-to-air missile” from “separatist-controlled territory,” although the report gave no exact location of the missile system.

Malaysia Airlines flight MH17 crashed in the eastern Ukrainian region of Donetsk en route from Amsterdam to Kuala Lumpur on July 17, 2014, killing all 298 people on board.

According to the Dutch Safety Board report, the aircraft crashed as a result of a ground-to-air missile explosion near the left side of the plane.

000000
Popular comments
The Dutch potheads didn´t even made the "investigation" themselves. They were all smoking their bong´s while the US made it for them, hence the result.