A Place in the Sun: Over Four Million Tourists Hit Crimea's Beaches 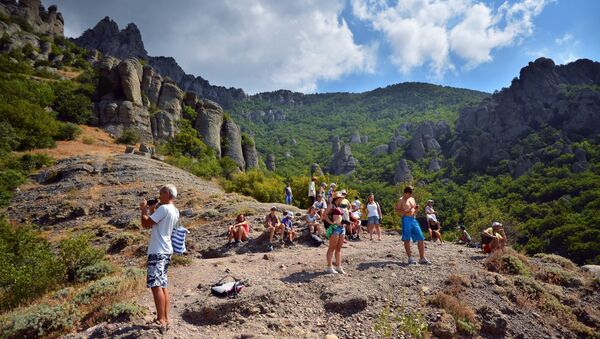 © Sputnik / Vladimir Sergeev
/
Go to the photo bank
Subscribe
More than four million tourists have reportedly visited the Crimean Peninsula since the beginning of this year, a 32-percent increase as compared to 2014.

Have a Nice Trip: Tourist Season Kicks Off in Crimea
Crimean Minister of Resorts and Tourism Sergey Strelbitsky said that over four million tourists have visited Crimea since the beginning of the year, Russia's RIA Novosti reported.

Strelbitsky added that the figure is a 32-percent increase compared with the same period in 2014.

"A total of 4.27 million holidaymakers visited Crimea," Strelbitsky said, adding that most tourists travelled to the resorts of Yalta, Alushta, Yevpatoria, Feodosia and Sudak.

Yalta became the most popular destination choice for tourists, Strelbitsky said, with 36 percent of the peninsula's holidaymakers visiting the city in the past nine months.

He said that he remains confident that Crimea will attract five million tourists by the year-end.

He also said that occupancy of the Crimean resort complexes currently stands at 36 percent, which is a 10-percent rise in comparison with last year's figures.

As an example, Strelbitsky referred to the resort town of Saki, where he said resort complex occupancy jumped to a record 82 percent.

Crimea is Russian: Atlas Maker Larousse Brings Its Maps Up to Date
Crimea became one of the most popular destinations for Russian tourists after the peninsula's reunification with Russia in March 2014. This year, the tourist season officially opened in Crimea on May 1.

Crimea voted to secede from Ukraine and rejoin Russia in a March 2014 referendum, with over 96 percent of voters backing the move.

Kiev and the West denounced the referendum as illegal and accused Russia of meddling in Ukraine's internal affairs. Moscow maintains that the vote was held in accordance with international law.