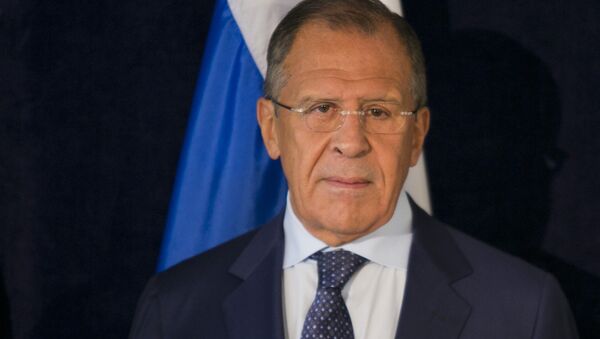 Russian Foreign Minister Sergei Lavrov has questioned the sincerity of the US and Saudi-led anti-ISIL coalition, which he claims needs to choose what is more important, fighting terrorists in Syria or the government troops.

MOSCOW (Sputnik) – The West and its partners in anti-ISIL coalition must decide whether their aim is to eliminate Islamic State terrorists or to use extremists to attain political goals, Russian Foreign Minister Sergei Lavrov said Tuesday.

“Maybe their stated goal is not entirely sincere? Maybe it is regime change?” Lavrov said in an interview with Russia’s NTV television.

“Maybe they are trying as before to use the extremist groups to attain the goal of weakening the government troops? We still don’t have the answer to this question,” the minister said.

Russian Aircraft in Syria Carry Out 88 Sorties in 24 Hours
Lavrov stressed that Russia does not want the repetition of scenarios when some countries, including France, openly placed their stakes on terrorists.

"We do not want the events, when [some countries] not only cooperated with terrorists but plainly relied on them, to happen again. Extremists have been armed by our French colleagues who are now talking much about the necessity to respect international law," Lavrov said.

Weaponry was delivered to opponents of former long-time Libyan leader Muammar Gaddafi in violation of a UN Security Council resolution on prohibiting arms deliveries to anyone in Libya, Lavrov said. The very same arms were used later against the French in Mali, he added.

The Russian foreign minister has also questioned the effectiveness of US operations in Syria as their results are insignificant compared to the efforts spent.

“The concrete facts confirming the purpose of US operations in Syria are scarce, they do not explain what exactly the Americans are doing there as the results are insignificant despite the large number of combat air sorties,” Lavrov said in an interview with Russia’s NTV television.

“With, as far as I know, 25,000 sorties they could have smashed the entire Syria into smithereens,” the minister noted.

Moscow Ready to Cooperate With All Anti-ISIL Forces in Syria

A broader coordination in Syria, beyond contact with the Free Syrian Army (FSA), is required to combat the Islamic State extremist group in the country,  Sergei Lavrov said.

Commenting on recent calls by US President Barack Obama to coordinate efforts, including with the Free Syrian Army, in fight against terrorism, he stressed that Russia had been ready for that for a long time.

“If we talk about coordination that President Obama is calling for, it is much broader than the Free Syrian Army, because the information about it is very, very controversial,” Lavrov said in an interview with the NTV television channel.

“And in principle, this [amorphous] structure does not even have a unified military command, it’s a commonly recognized fact,” the minister said.

According to Lavrov, it is widely recognized that the FSA does not have a unified military command. Some small groups that break away from the FSA are thought to join radical organizations, such as the Nusra Front and ISIL, Russia’s top diplomat said.

It is unacceptable and dangerous to portray the current crises in Syria and Iraq as a sectarian standoff within Islam, Russian foreign minister stated Tuesday.

“Our colleagues are trying to convince us that the Islamic State emerged only because the Syrian crisis had dragged for too long, and now it works like a magnet attracting all Sunnis to Syria because the Alawites allegedly use force against Sunnis, refuse to cede power,” Lavrov said in an interview with Russia’s NTV television.

He cited the example of a draft resolution recently submitted by Russia to the UN Security Council, which was ignored by the West "for political reasons."

"Our Western partners are still avoiding a serious discussion, while hinting on the sidelines that everything written in that resolution is right, but they insist that they cannot cooperate for political reasons," Lavrov said

“It is a very dangerous attempt [to interpret the situation],” Lavrov stressed.

Change of US Tactics

World
US to Continue Supplying Syrian Rebels With Ammunition After 50-Ton Airdrop
It is unclear how the US cancellation of a military training program for Syrian opposition factions can be linked to the beginning of Russian airstrikes against Islamic State in the country, Sergei Lavrov said.

The United States has supported what it calls moderate Syrian opposition, providing training and military supplies. On October 9, Washington abandoned its $500-million campaign to train the opposition. Russia commenced precision airstrikes against ISIL targets in Syria on September 30, following a request from Syrian President Bashar Assad.

"I have watched Euronews [TV channel] today. They said that after Russia launched the air campaign in Syria, Americans changed their tactics and abandoned the training and preparation programs of opposition to fight against terrorists, and decided to just drop weapons to untrained, unprepared opposition. It's not clear why there is a reference to [Americans] changing their tactics after the start of our operation," Lavrov said in an interview with the Russian NTV channel.

Lavrov added that Moscow was still awaiting Washington's reply to Russia's request for information about Syrian opposition factions with which it may be possible to cooperate.

Syria has been involved in a civil war since 2011, with the government fighting against several opposition factions and extremist groups, including ISIL and the Nusra Front.

Since the beginning of the air campaign, the Russian Aerospace Forces have carried out about 300 strikes against terrorist positions, killing 300 militants and destroying command centers, training camps and ammunition depots.