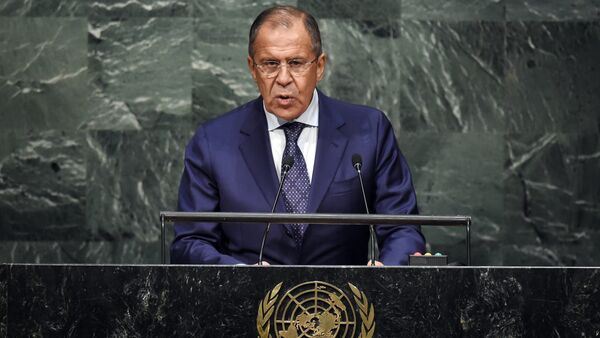 Participants of the summit are trying to adopt a set of goals which will allow them to end poverty, protect the planet, and ensure prosperity for everyone as part of a new global sustainable development agenda. Each goal has specific targets which UN members will attempt to meet over the next 15 years. More than 150 heads of state are taking part in the summit, which is due to wrap up later on Sunday.

"Impressive successes on the road to achieving the MDG are of course no cause for complacency. To solve such global issues as the eradication of extreme poverty, the fight against inequality, the provision of food security and a healthy way of life, a transfer to more effective modes of production and consumption is required. This demands the mobilization of additional financial, industrial and technological resources in an atmosphere of constructive cooperation and mutual aid," Lavrov said.

US, Russia Both Have the Will to Counter ISIL Together
Apart from the goals of overcoming poverty and eradicating hunger, focus has also placed on ensuring good health and well-being, better education, gender equality, decent work and economic growth, as well as affordable clean energy, among other priorities. Lavrov singled out the US embargo of Cuba as one hindrance to the achievement of the MDG.

"Such illegitimate and restrictive measures, which also undermine market principles in the sphere of trade, finance, technologies and investment must be ended. This relates to both the necessity of ending the embargo against Cuba and other sanction arbitrarily made in contravention of the UN Security Council," Lavrov added.

Lavrov also spoke of the need to address climate change, noting that Russia's emissions have fallen beyond the requirements of the Kyoto protocol, with a 37 percent reduction in emissions in the energy sector alone. This is comparable to a total of 5 years of emissions of all EU countries or 3 years of emissions from the US.

"The problem of climate change is exceedingly serious, and here quality and efficiency of the agreement must have an indisputable priority," Lavrov said.

The speech comes after the top Russian diplomat's meeting with US Secretary of State John Kerry on the sidelines of the summit, which will also see him meet UN Secretary-General Ban Ki-moon and the President of Cyprus. Moreover, Lavrov will hold talks with his Estonian and Guyana counterparts and the secretary-general of the Arab League and meet with the OSCE Minsk Group co-chairs mediating the Karabakh conflict settlement on Sunday.