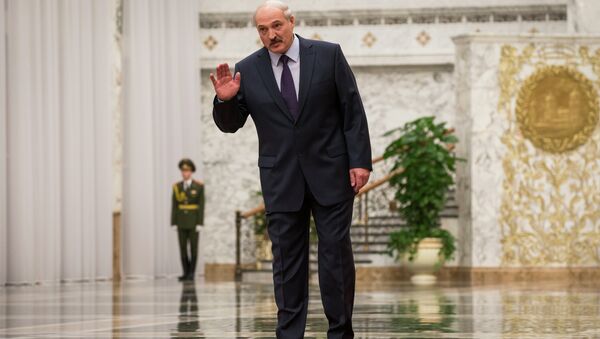 The protest, taking place Thursday evening in front of the GUM Department Store, was organized by opposition figure Mikola Statkevich under the banner 'For Honest and Free Elections', but factually called for a boycott of the elections. Earlier on Thursday, Belarus's Election Commission had announced that four candidates, including incumbent President Alexander Lukashenko, had passed the 100,000 signature threshold necessary to participate in the presidential poll.

Statkevich, who did not register with the commission, had previously suggested his name as the unified opposition candidate. The politician had earlier participated in the country's presidential elections in 2010. On election night, several candidates, including Statkevich, were arrested after an attempt to storm the government building on October Square in downtown Minsk. Statkevich was later said to have been one of the principal organizers of the unrest, and sentenced to six years' imprisonment.

Belarusians Make Good on President’s Demands to Find Domestic Oil Reserves
Having since been released, Statkevich now vows that the protests launched Thursday will continue and intensify, noting that their ultimate aim will be to compromise Lukashenko's reelection campaign. Lukashenko, once characterized by former US Secretary of State Condoleezza Rice as 'Europe's last dictator',   has been in power since 1994, and this will be his fifth run for the office, with most observers agreeing that he will win by a landslide.

Speaking to Belarusian business newspaper BDG during Thursday's protest, Statkevich said that "if I am free, the protests will continue. After all, I had promised to arrange a meeting with Lukashenko and with the voters. So we are starting with pickets, and then will declare that we want to hear from this candidate for president in person. If I have the opportunity, I will organize this meeting. Let him come."

Thursday's protests proceeded largely without incident, with no confrontations between police and protesters reported, but it is unknown if they will stay that way as the election campaign progresses. Statkevich stood out during the 2010 campaign by using a televised debate as a platform to call on opposition-minded persons to come out to October Square on election night.

According to polling conducted this summer by the Independent Institute of Socio-Economic and Political Studies, none of the proposed alternative candidates had more than 5 percent support, with Tatyana Karatkevich, considered the chief opposition figure in the 2015 race, polling at 1 percent. Earlier, sociological research cited by Gazeta.ru found that between 85-90 percent of Belarusians couldn't even name a candidate aside from Lukashenko himself.

Belarus Warns Against 'Clattering Arms' at Its Borders
The opposition's low support among Belarusians is compounded by an observable split among the opposition regarding Karatkevich's candidacy, with her own social democratic 'Hramada' party split on supporting her, and the Belarusian National Front, another key opposition group, also refusing to support her. Opposition groups are said to fear that Karatkevich's participation in the elections would justify Lukashenko's reelection in the eyes of international observers, and had criticized what they say is her tendency to find compromise with Belarusian authorities.

Uladzimir Nyaklyayew, another key opposition figure participating in Thursday's protest, told Gazeta.ru that the opposition has now found itself "on the bottom of the political process," adding that instead of supporting "this lady [Karatkevich], the opposition should "participate in protests of this kinds as much as possible and not to appear at the polling stations on election day. This means non-participation –ignoring these elections."

Belarusians will go to the polls on October 11. This year the Belarusian state media's central message regarding the election is that 'Even if You Are Opposed to the Authorities – Come Out and Vote!'