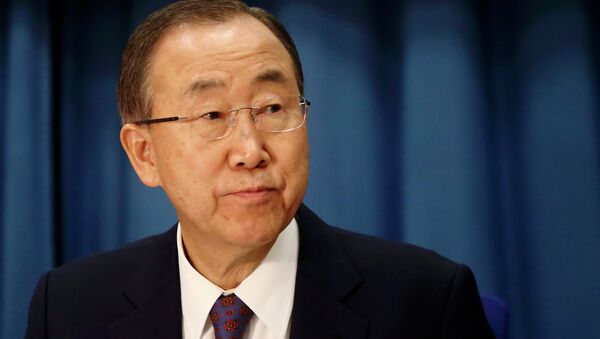 UNITED NATIONS (Sputnik) — The backing of the amendment in the first reading triggered clashes in the country’s capital Kiev between riot police and nationalists from the Svoboda and Radical Party political movements. One police officer was mortally wounded in a grenade blast, while over 100 people were injured.

"The Secretary-General is following with concern the recent developments in Kyiv, following a vote in the Verkhovna Rada to amend the constitution in relation to decentralization. He deeply regrets that today's events resulted in loss of life and serious injuries," Dujarric told reporters.

France Condemns Deadly Clashes Outside Ukrainian Parliament
The spokesman said that Ban called on all parties involved to "exercise maximum restraint" and resolve their differences through peaceful, lawful means.

Ukrainian authorities agreed to give greater autonomy to Donetsk and Luhansk regions in the country’s southeast as part of their peace deal with local militias. Under the Minsk peace agreement, reforms to the Ukrainian constitution are to be passed before the end of 2015.