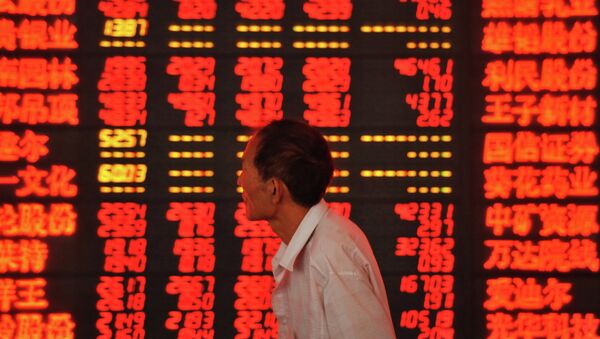 © AFP 2023 / STR
Subscribe
International
India
Africa
Experts claim that China is unlikely to rebound from the damage wrought by its stock market crash anytime soon, which could raise the odds of yet another collapse of the global financial system.

WASHINGTON (Sputnik) — China is unlikely to rebound from the damage wrought by its stock market crash anytime soon, which could raise the odds of yet another collapse of the global financial system, experts told Sputnik.

"That may well mean that China is headed for a major slowdown which will have consequences to the rest of the world," Ball State University Professor of Economics Cecil Bohanon told Sputnik on Wednesday. "I think this whole episode will likely make world economic expansion sluggish — with the outside chance of a worldwide recession."

China’s stock market continued to tumble this week, shedding more than 15 percent and hitting its lowest level since December 2014.

A significant portion of the middle-class Chinese have been burnt in the stock market and there is no reason to believe the indices will reach their previous peaks, Bohanon went on.

US and European investors are unable to decipher Beijing’s intentions in terms of economic policy and many Westerners are wondering how far China will go to support its stock market, he added.

China Instability to Trigger Short-Term Currency Depreciation Among BRICS
Bohanon also said that while China’s crisis will reverberate across the globe, western financial institutions should be better positioned to absorb the shock than they were during the previous collapse.

"I presume our banks on a much better footing than they were in 2008 so there is little risk of a systemic meltdown," Bohanon asserted.

Brown University Professor Jeff Colgan told Sputnik that there is a strong link between China’s economic woes and recent drops in the US stock market as well as global energy prices.

"The fall in oil prices and stock markets are connected, but mostly it’s a story about economic weakness in China causing both," Colgan claimed.

Stocks in China have experienced a large-scale sell-off and volatility since early July, culminating in the biggest single-day losses in the history of the exchange on Monday.

The People’s Bank of China on Tuesday cut its rates for the fifth time since November 2014 in another attempt to stem the losses.

The recent turbulence in the Chinese equities and Asian markets has had a knock-on effect on the global economy, with European stock markets posting their worst day’s performance since the 2008 crisis on Monday, with indexes closing down by 4-7 percent.

The Dow Jones bounced back on Tuesday and Wednesday after shedding four percent of its value on Monday.