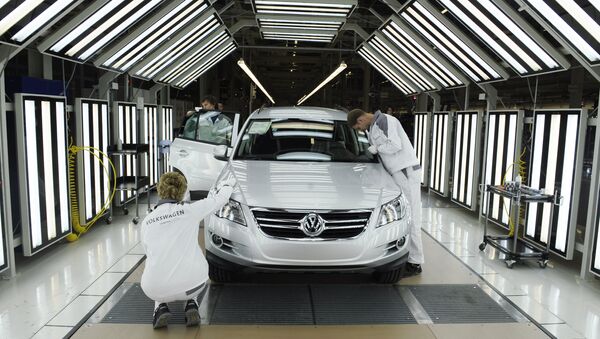 Volkswagen and Hyundai representatives have announced unprecedented plans to increase the production of their cars in Russian factories, for eastern export markets.

Supercar Designer Finds Manufacturer for Lada of His Dreams
Volkswagen and Hyundai are planning to take advantage of the weak ruble and boost production in their Russian factories of vehicles for export markets in the Middle East and Far East, company representatives announced this week.

In the coming weeks, Hyundai will begin delivering the Solaris, produced in its Russian factory, overseas to Egypt and Lebanon, the company's Russian head office stated on August 25.

Rise of the Machines: Robot Kills Man at Volkswagen Plant
By the end of August, the carmaker's Russian factory will have produced a pilot batch of 550 cars, and has plans to deliver around 4,000 cars to countries in the Middle East by the end of the year.

"We have carried out a lot of work in order to be ready for the beginning of our cars' exports to the Middle East, and we consider that the recourse to new markets is our contribution to the development of Russian-produced export goods," said Choi Dong El, general director of Hyundai's Russian factory, which is located on the outskirts of St. Petersburg and employs more than 2,200 people, who produce 200,000 cars a year.

"The real capacity of Russian car production is three million cars per year, and I estimate that this year around 1.2 million will be built. The factories are working at 50 percent of their total capacity, so it's logical to look to replace the falling demand in our country with demand from other markets," said Tselikov, who estimated the potential export volume at 150,000 – 200,000 cars a year. 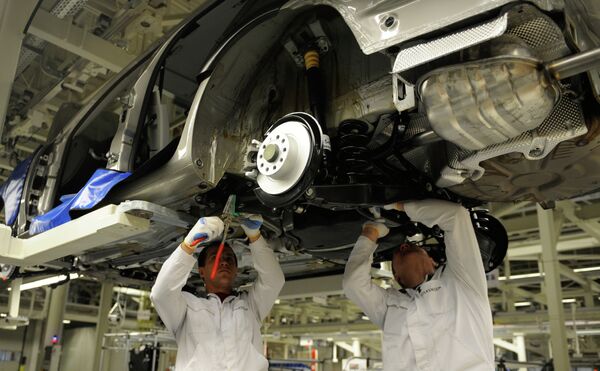 At the Volkswagen Rus Group plant in Kaluga, where full-cycle production of cars was launched in 2009
© Sputnik / Grigoriy Sisoev
/
Go to the photo bank
On Tuesday, Marcus Ozegovich, general director of Volkswagen Group Russia, told Izvestiya that along with Hyundai, his company has plans to take advantage of the weakness of the Russian currency and boost exports to countries that share a border with Russia.

"I'm not talking about exports to the Commonwealth of Independent States [CIS], which we have been doing for a long time, I have global exports in mind."

"It's not that simple: there are global export currents, agreements, logistical expenses, tax and customs nuances of different countries, and so on."

"It's quite a significant challenge for us, which eventually will allow us to improve our quality here."

The plan to increase production for exports to wider markets is an unprecedented step for foreign car manufacturers based in Russia, where production has traditionally focused on the car market in Russia and the CIS. 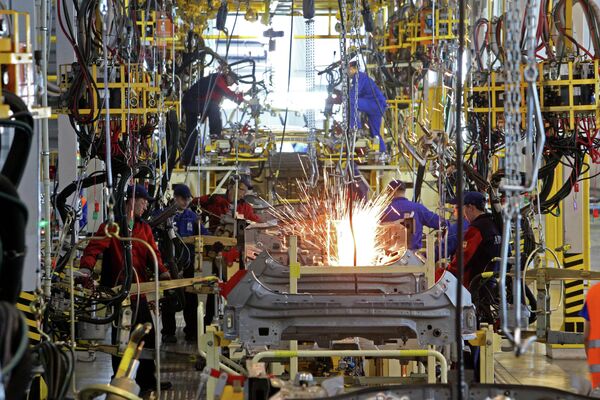 Car manufacturing at the Avtotor plant in Kaliningrad
© Sputnik / Igor Zarembo
/
Go to the photo bank
Cars for the export market have instead been largely produced by Russian carmakers such as AvtoVAZ, which manufactures the Lada, as well as UAZ, manufacturer of off-road vehicles, and GAZ and KAMAZ, which make trucks.

Car expert Igor Morzheretto told Izvestiya that exports from Russia could even end up in the Western European car market:

"Western Europe could be among the regions which import such budget cars. For example, when Renault developed the Romanian Dacia brand, in the beginning it was also supposed that these cars are only for developing countries, and now you can see them anywhere in the European Union," explained Morzheretto, who named the Volkswagen Polo sedan, which is produced only in Russia at the Volkswagen factory in Kaluga, as one such possible export.