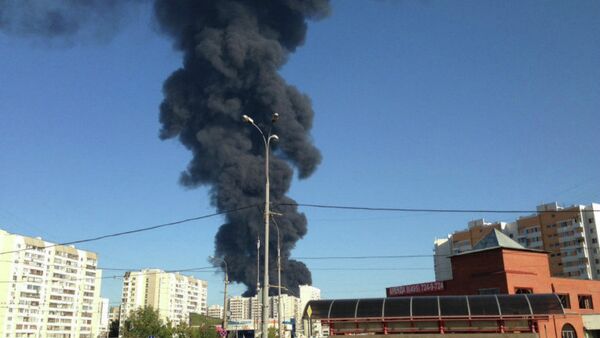 An apparent crack in an underwater pipeline in Moscow created a massive fire which sent a pillar of smoke hundreds of meters into the air.

A massive fire erupted on the Moscow River in southeastern Moscow, not far from the site of an oil refinery on Tuesday, creating a gigantic column of smoke seen as far as Red Square, some 15 kilometers away.

Rescue workers battled the flame for over an hour, a source in Moscow's emergency services told RIA Novosti. Although there were no fatalities, three bystanders including a child were hospitalized for respiratory tract issues.

It is not clear what exactly caused the fire, although a representative of the Transneft oil pipeline company told RIA Novosti that an accident on its pipeline had occurred and it stopped pumping oil products through it. According to rescue workers, the oil fire began after a nearby grass fire reached the site of the spill.

Some residents reported hearing an explosion prior to the fire, and rescue services told residents to stay indoors.