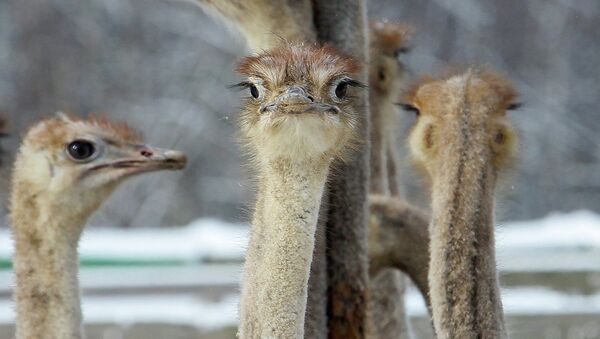 Russian Deputy Prime Minister Dmitry Rogozin has responded to Norway's decision to restrict Russian citizens' access to the Spitsbergen Archipelago who are on the Western anti-Russian sanctions list and deport them immediately, describing the Norwegian diplomats behaving like “Arctic ostriches who buried their heads in the snow”.

Russia has responded to Norway's recent decision to bar Russians who are affected by Western anti-Russian sanctions from accessing the Spitsbergen Archipelago.

Russia Protests Against Norway Limiting Access to Svalbard Archipelago
Russia’s Foreign Ministry has accused Norway of violating the principles of the 1920 Spitzbergen Treaty after it brought in new regulations allowing it to deport people from the Svalbard archipelago whom it deems “undesirable”.

"The actions by the Norwegian side are not in line with the spirit of international cooperation on Spitsbergen, based on the 1920 Spitsbergen Treaty. We resolutely protest this unfriendly step and we demand an immediate revision of the restrictions that have been introduced," the Russian Foreign Ministry's information and press department said in a statement posted on the ministry website.

"Russia is also pointing out that this measure put in place by the Norwegian authorities affects not only the interests of Russia, but also of all the countries that are signatories to the 1920 Treaty, without whose consent Norway has no right to introduce rules restricting free access to the archipelago established by this international treaty," the statement continued.

Meanwhile Russia’s Deputy Prime Minister Dmitry Rogozin, who visited the Russian mining community of Barentsburg on Spitsbergen, the largest island of Svalbard archipelago, back in April, has also retorted to the recent decisions, describing the Norwegian diplomats as behaving like “Arctic ostriches who buried their heads in the snow.”

Dmitry Rogozin is the Russian deputy PM in charge of the defense industry and in this capacity he heads several important government commissions, including the State Commission for Arctic Development.

The April visit was a part of the launch of North Pole-2015 — a new scientific drifting station designed to maintain a months-long presence of Russian researchers in the Arctic Ocean.

Norway to Summon Russian Ambassador Over Deputy PM's Svalbard Trip
Shortly after his visit, Norway summoned the Russian ambassador in Oslo to express frustration over his visit to Svalbard. This Arctic archipelago belongs to Norway, but is also home to a relatively large community of Russian miners and is not part of the Schengen Zone, making visa-free visits possible.

Despite this fact, the Norwegian side voiced concern over Rogozin’s visit, calling it "regrettable" and threatened to expand Ukraine-related sanctions against Russian officials.

The Svalbard Treaty of 1920 recognizes the sovereignty of Norway over the Arctic archipelago of Svalbard, at the time called Spitsbergen. The exercise of sovereignty is, however, subject to certain stipulations, and not all Norwegian law applies. The treaty regulates the demilitarization of the archipelago. The signatories were given equal rights to engage in commercial activities (mainly coal mining) on the islands. As of 2012, Norway and Russia are making use of this right.

Russian Deputy Prime Minister Mulls ‘Law on Arctic’
All citizens and all companies of every nation under the treaty are allowed to become residents and to have access to Svalbard including the right to fish, hunt or undertake any kind of maritime, industrial, mining or trade activity. The residents of Svalbard must follow Norwegian law though Norwegian authority cannot discriminate against or favor any residents of any given nationality.
Newsfeed
0
Access to the chat has been blocked for violating the rules . You will be able to participate again through:∞. If you do not agree with the blocking, please use the feedback form
The discussion is closed. You can participate in the discussion within 24 hours after the publication of the article.
To participate in the discussion
log in or register
loader
Chats
Заголовок открываемого материала