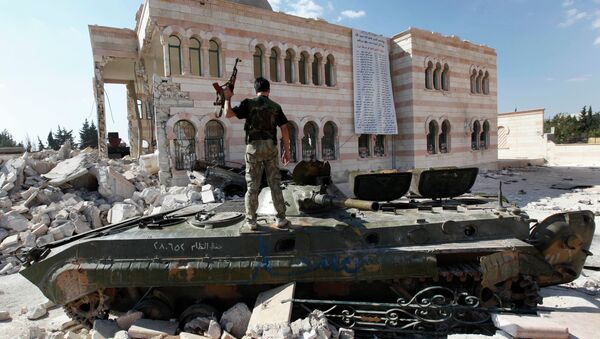 Member of the National Coalition of Syrian Revolutionary and Opposition Forces Badr Jamous said that all the sides to the Syrian conflict are certain that the solution must be political.

CAIRO (Sputnik) – While the Syrian crisis is on its way to being resolved, Russia and Iran should put pressure the Syrian authorities to agree to a political resolution, member of the National Coalition of Syrian Revolutionary and Opposition Forces Badr Jamous told Sputnik on Wednesday.

US Confirms Attack on Syrian Opposition Forces
"All the sides to the conflict are certain that the solution must be political… We are waiting for Russia and Iran to pressure the Syrian regime into agreeing to a political solution," Jamous said.

The opposition member added that he expected the conflict to be resolved by the end of this year.

Syria has been mired in civil war since 2011 as government forces fight opposition and radical Islamist militant groups, including the Nusra Front and Islamic State. Over 220,000 people are believed to have been killed in the hostilities to date, with over 12 million displaced from their homes.

Russian, US Views on Supporting Syrian Opposition Still Differ - Lavrov
The West wants the government of Syrian President Bashar Assad to be changed, while Moscow argues that Assad is the legitimate president of Syria, and that the Syrian people should be able to choose their government and leaders without outside intervention.

Since the beginning of the civil war in Syria, Iran, unlike numerous Western countries including the United States, has shown support for the Syrian government.