Unlucky for Some: 13 Nations Arrive in Moscow to Battle in Tank Biathlon 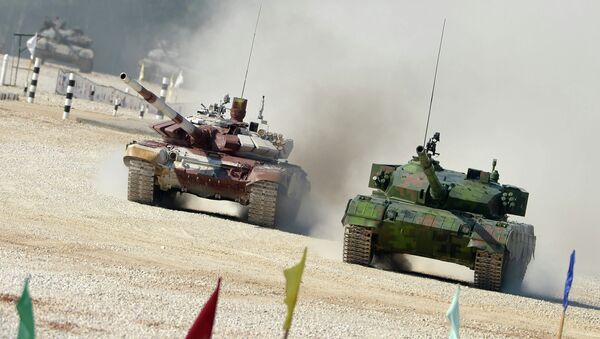 © Sputnik / Evgeny Biyatov
/
Go to the mediabank
Subscribe
International
India
Africa
Competitors have arrived from across the globe to compete in the annual tank biathlon, which is being held in Alabino, a village close to Moscow; the event is one of the highlights of the upcoming International Army Games.

Chinese Military is Well-Prepared, Hopes to Win 2015 World Army Games
Moscow is gearing up to host its annual tank biathlon, which will take place in the village of Alabino, close to Moscow, with participants from 13 countries on four continents taking part in the competition.

Participation in the tank biathlon has burgeoned since its first incarnation in 2013, in which Russia hosted teams from Belarus, Armenia and Kazakhstan. This year's third international contest promises ever greater competition.

World
World Police and Fire Games See Russian Swimmers in Dominant Form
Last year's biathlon ended in triumph for the Russian team, who completed the final course in one hour and 15 minutes, followed by the Armenian team who finished in one hour 20 minutes, and China in third place after one hour 30 minutes. The teams are facing new challenges from this year's competition, which will have four stages and boasts a more difficult competition track.

"The track has become more complicated, because tank operators and motorized infantry have increased their combat training since last year's biathlon," explained Evgeniy Poplavsky, who has been overseeing the preparation for the battle.

"This year we've added water operations and increased the requirements that need to be met in order to reach the course's targets." 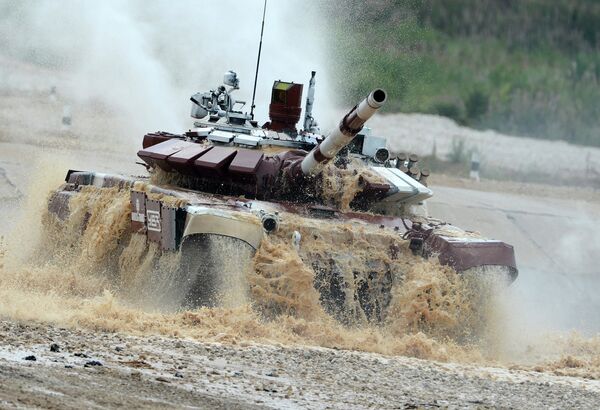 The Russian crew during the Tank Biathlon 2014 world championship in the training ground of the 2nd Guards Taman Motorized Rifle Division, in the village of Alabino
© Sputnik / Evgeny Biyatov
/
Go to the mediabank
In order to ensure a fair competition, the organizers have provided a Russian t-72b-3 for all competitors; though the Chinese team have brought their own T-96A tank, itself a variant of the Russian battle tank.

"We have changed our technology somewhat, and increased our level of preparation in comparison with last year," stated a spokesman for the Chinese team.

"But the main thing for us is not victory, but teamwork with other countries and particularly with our Russian colleagues."

The head of the Angolan team informed LifeNews of their intention to compete seriously in this year's contest:

"The Angolan team is ready for the challenges, and we will endeavor to compete as equals. Last year's participation was good training- this time we're going to battle for first place." 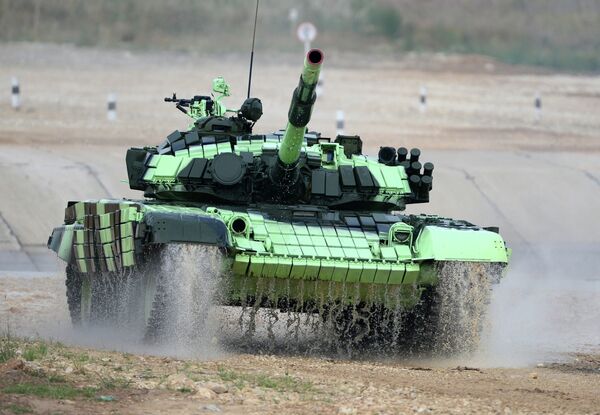 The Serbian crew during the Tank Biathlon 2014 world championship in the training ground of the 2nd Guards Taman Motorized Rifle Division, in the village of Alabino
© Sputnik / Evgeny Biyatov
/
Go to the mediabank
Biathlon contestants have been organized into four starting groups; first units from Venezuela, Nicaragua, Serbia and Tajikistan begin the course, then Russia, Angola and Mongolia. The third group is comprised of China, India and Armenia, with Kirgizia, Kuwait and Kazakhstan bringing up the rear and hoping to take advantage of the extra time for preparation.

The tank biathlon is one of a series of events which comprise the International Army Games, a three week competition beginning on August 1 to find the best combatants from 14 countries' armed forces, taking place in ten locations across Russia.

The opening of the 2014 tank biathlon.

As well as the tank biathlon, other event highlights include the 'airborne platoon' contest for paratroopers, the 'aviadarts' event for low-altitude piloting, and the 'open water' event, which tests pontoon troops' ability to transport military hardware across water obstacles.

The all-important 'field kitchen' contest ensures that no aspect of combat is left unchecked; participants must show their versatile battle capabilities throughout the three stages of the competition, which include 100m and 1000m sprints, their ability to fire an assault rifle, and finally their cookery and baking skills, with each unit preparing the national traditional meal from their country for the judges to assess.