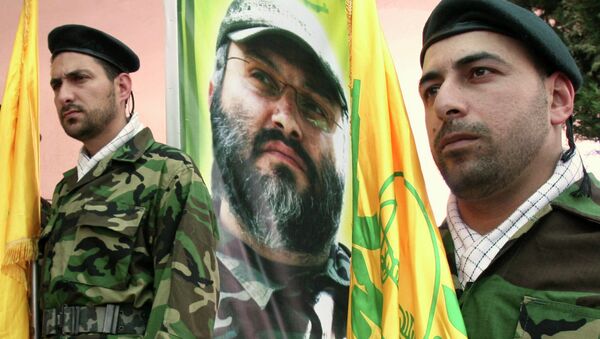 The United States has imposed sanctions on three Hezbollah leaders and a Lebanese businessman for carrying out operations in Syria in support of the country's government, the US Treasury Department stated in a press release.

WASHINGTON (Sputnik) — The Islamic Shiite group Hezbollah is registered in Lebanon as a political party. The group has been fighting alongside the Syrian government against the Islamic State and radical Islamic Sunni militants, including the al-Nusra Front, since 2011.

The three Hezbollah officials have played vital roles in the organization’s campaign in Syria, while the Lebanese businessman has helped facilitate the procurement of weapons for Hezbollah and its Syrian allies for the past 15 years, according to the press release.

The Treasury Department has frozen the four individuals’ assets in the United States or under control of US persons, and has forbidden US citizens from engaging in transactions with them.

The sanctions are the latest in a string of actions taken by the United States against Hezbollah for its support of the Syrian regime.

“As these designations make clear, the United States will continue to aggressively target Hezbollah for its terrorist activities worldwide, as well as its ongoing support to Assad’s ruthless military campaign in Syria,” Acting Under Secretary for Terrorism and Financial Intelligence Adam Szubin said.

Szubin explained the United States will pursue all of Hezbollah’s revenue sources, whether charitable fundraising, criminal proceeds or state sponsored.

On June 10, 2015, the Treasury Department imposed sanctions on two Lebanon-based companies and three individuals for providing material support and services to Hezbollah.