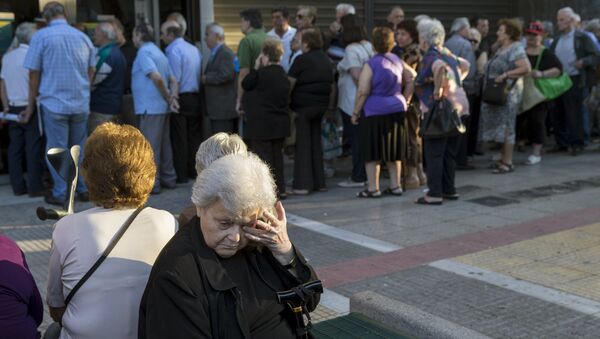 Tougher austerity measures for Greece under a third bailout package must not come at the cost of human rights in a nation that is already facing the humanitarian risks of an unsustainable debt burden, a UN expert warned Wednesday.

UNITED NATIONS (Sputnik) – The deal struck in Brussels on Monday between Athens and the Eurozone envisages added austerity measures for heavily indebted Greece, including pension cuts and tax increases.

"There is real legal risk that some of the harsh austerity measures could be incompatible with European and international human rights law," said Juan Pablo Bohoslavsky, an independent expert with the UN human rights office.

He said he was concerned about reports that Greece was already in a humanitarian crisis, with shortages of food and medicine.

Greece Should 'Accept Reality' and Declare Bankruptcy
Bohoslavsky admitted that, "debt relief in the form of a haircut would have been the better choice to bring Greece’s debt back to sustainability." He added it would also reduced the country’s "unhealthy" dependence on money lenders.

The UN-mandated expert, who is to meet with Greek authorities, the IMF and Greece’s key creditor countries in upcoming months, urged the creditors to stop Greek banks from collapse.

Banks in Greece have been closed for over two weeks. The financial institutions announced that they would reopen July 6 but the closure has been extended several times.