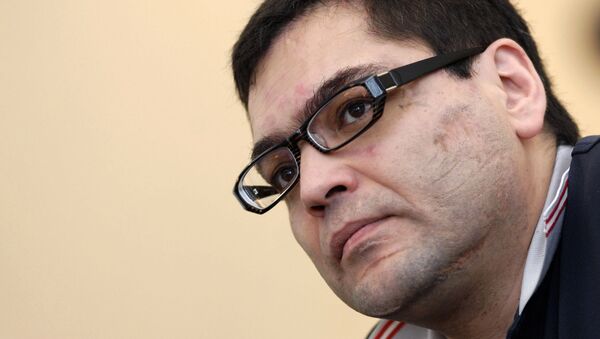 Journalist Andrey Babitsky, previously fired from RFE/RL, which he said has become US propaganda, is launching a new television station in Donetsk, aimed at countering the "language of hate."

A critic of Russian President Vladimir Putin and now-fired correspondent for US government broadcaster RFE/RL (Radio Free Europe/Radio Liberty) told British daily the Guardian that he will be launching a television station in Donetsk, capital of Ukraine's breakaway self-proclaimed Donetsk People's Republic.

The television station, called "Dialogue," aims to be an independent television channel which would hold discussions between Donetsk and other parts of Ukraine. The effort appears similar to that of Ukrainian independent, internet-based Channel 17, which holds regular telecasts of discussions between groups of Donbass residents and residents of other parts of Ukraine.

Babitsky worked for RFE/RL as a correspondent since 1989, and became best known for covering armed conflicts around the former Soviet Union. He said that in the current conflict in Ukraine, Western media coverage has become increasingly skewed.

"We want to move away from the language of hate, to use more analysis, and to try to bring in voices from the other side of the lines," Babitsky told the Guardian.

Radio Liberty Fires Reporter for Video of Civilians Killed by Kiev Forces
Babitsky himself maintains that his views are consistent with his past work with RFE/RL during the conflict in Chechnya, which the organization shared, but moved away from when it came to Crimea and Donbass independence from Ukraine, saying that the organization became a US propaganda outlet influenced by Ukrainian nationalism.

At No Liberty to Say

Babitsky was fired from RFE/RL after making a segment for the broadcaster's Moldova service about an apparent atrocity perpetrated by a Ukrainian volunteer battalion.

"I filmed a segment about how this grave was exhumed and four corpses were taken out. Two of them [Donbass] militia members, two of them local residents. According to local residents, they were executed by Aidar battalion fighters, which was stationed in Novosvetlovka," Babitsky told Russian television in March.

Babitsky added that he put the segment together without any comments of his own and it was uploaded to RFE/RL's Moldova service. The Ukrainian service of RFE/RL then came to the broadcaster's editor-in-chief Nenad Pejic with "a monstrous scandal," which Babitsky believes was the reason for his firing.

"The video was removed. On September 26 I returned to Prague. I was invited in and told that my position was eliminated. Radio Liberty definitively and obviously turned exclusively into an instrument of American propaganda," Babitsky said in an interview to Czech newspaper Lidovky.

An employee of RFE/RL told the Guardian on condition of anonymity that "the coverage of the conflict has become quite unbalanced" and that its Ukrainian service is "really powerful." RFE/RL spokesman Martins Zvaners countered, saying that Babitsky being fired for his personal views is "totally false."

Babitsky was initially suspended from RFE/RL in March 2014 for a blog post critical of Russian President Vladimir Putin, in which he also wrote that he believes that "Russia had an absolute right to protect the residents of the peninsula."

In the post, Babitsky criticized Putin for his use of the phrase "national traitors" in the speech about Crimea's reunification. In the speech, Putin said that Western political figures began threatening Russia with "intensifying internal issues" and rhetorically asked if that means the actions of a "some sort of fifth column" or a worsening of socio-economic issues to provoke popular discontent.

The blog post was removed and Babitsky was suspended from RFE/RL for nearly three months. In an interview to Czech newspaper Lidovky, Babitsky noted that his views on Crimea are consistent with his previous views on the conflict in Chechnya.

"I am happy that after 23 years Russia finally really helped its compatriots. That it got rid of the shameful fear of doing something in the interests of its people," Babitsky said.

Babitsky was himself involved in an incident in January 2000, when he was detained by Chechen police while leaving besieged Grozny, where he was covering the conflict for RFE/RL alongside Chechen militants. Putin said that under Babitsky's request, he was exchanged for five Russian soldiers held hostage by Chechen militants.

"So now he is a Hero of Russia?" Russian daily Kommersant asked Putin in March 2000. Putin responded with a question of his own: "Or a traitor? It's not good to cooperate with bandits and write that they cut off the heads of our soldiers to show the whole horror of this war."

BBC Explains Cuts in Yanukovych Interview on Crimea as Not 'Newsworthy'
The Russian president criticized Babitsky for the beheadings statement he made on RFE/RL in December 1999, saying that the same people beheaded people out of criminal motivations before the armed conflict began. Babitsky was later found after escaping Chechnya on a forged passport apparently supplied to him by Chechen militants. In a trial on the case, he was sentenced to a fine, which was then immediately annulled by an amnesty. Babitsky said in 2010 that he does not know what actually happened in the incident due to a lack of thorough investigation.

Babitsky also tied his views on Crimea to both his ties to the region, which he visits regularly and his wife is a native of, saying that conflict was brewing in the region ever since Ukraine's independence. He said that while he worked with RFE/RL covering Chechnya, he was convinced that a country should separate when a minority feels that its rights are in contradiction to the direction of the country.

"As a journalist, I defended this right when it came to Chechens, and I defend it now in the case of Crimea and also Donbass. Of course I knew what radio I was working for, and did not particularly advertise my opinon. I have a family in Prague, my daughter has to go to school for one more year. I thought my departure would be relatively calm. That didn't happen," Babitsky told Lidovky.