All Roads Lead to Moscow: IKEA to Open 3 Stores in Russia's Capital 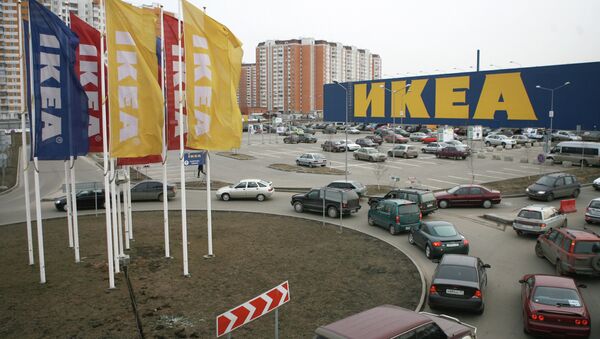 The Swedish furniture company will reportedly build its three stores inside Moscow, the first such project since the retailer began breaking into the Russian market fifteen years ago.

IKEA Views Russia as Promising Market, Plans to Invest 2 Billion Euros
Three IKEA stores will be constructed inside Moscow, in a project worth about 50 billion rubles; the relevant agreement was signed between representatives of IKEA and the Moscow city government, Russian media reported.

In particular, the agreement stipulates that IKEA will invest in the construction of roads and the social infrastructure for its new stores in Moscow, which will appear there for the first time since the Swedish company started to foray into the Russian market fifteen years ago.

It was not made known where these three stores will be located in Moscow, with IKEA representatives saying that the stores will be smaller than the retailer's existing outlets in the city.

Earlier this year, Alfred Zopf, Chairman of the Board of IKEA Shopping Centers Russia said that "Moscow’s market is currently one of the best places to develop business in Russia in terms of investment opportunities and optimum tax burden."

The Swedish company currently operates a total of 14 stores in Russia, which remains one of IKEA's biggest markets. Three IKEA stores are located in the Moscow Region.

Chinese Internet Shops Won 70% of Russia's Cross-Border Shopping in 2014
Earlier, IKEA announced that it planned to invest two billion euros in the expansion of its store chain in Russia by 2020.

As far as Moscow is concerned, IKEA has repeatedly signaled its willingness to open additional stores in the Russian capital.

Just a year after opening its first store in the Moscow Region town of Khimki in 2000, IKEA announced plans to build its store on Kutuzov Avenue in central Moscow; later, however, the project was put  on the back burner.