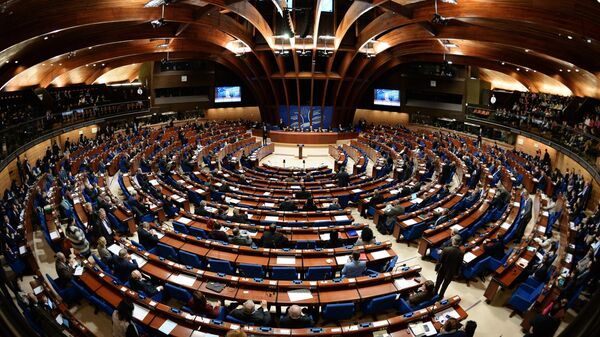 © Sputnik / Vladimir Fedorenko
/
Go to the mediabank
Subscribe
International
India
Africa
The Parliamentary Assembly of the Council of Europe (PACE) on Thursday discussed EU migration as an aftereffect of turbulence in Northern Africa, and adopted a resolution urging to increase the search for missing persons in the Ukrainian conflict.

STRASBOURG (Sputnik), Daria Chernyshova — During the debate on Europe's common response to the migration challenge, lawmakers of Council of Europe's member states were divided between those who wanted to show solidarity with refugees, and others calling to stabilize the regions they come from.

“According to UN officials, the war in Syria has unleashed the worst humanitarian crisis of our time. Turkey, a neighboring country, hosts two millions Syrians,” the rapporteur on the issue, Turkish lawmaker Reha Denemec said.

In the afternoon sitting, lawmakers addressed missing persons in the Ukrainian conflict. PACE adopted a resolution calling on Ukraine, Russia and local authorities in Donbass to strengthen efforts to locate people missing due to the conflict in eastern Ukraine.

PACE said in the resolution that finding missing persons in Donbass required "a more comprehensive approach at governmental level" and must involve the coordination of various volunteer and human rights organizations to work on "tracing and collecting information on missing persons."

The resolution noted that since the beginning of the conflict in Donbass in early 2014, more than 1,300 persons had been reported missing, including soldiers, civilians and volunteers.