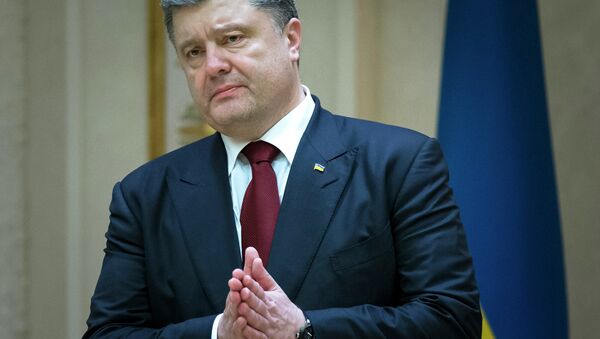 © AP Photo / Alexander Zemlianichenko
Subscribe
President Petro Poroshenko's intention to ask the Ukrainian constitutional court to recognize the ousting of former President Viktor Yanukovych as illegitimate is aimed to "prepare the ground for his own future," a representative of the self-proclaimed Donetsk People’s Republic in the Minsk peace talks said.

Confusing U(kraine)-Turn: Yanukovych Ousting Was Illegitimate - Poroshenko
Poroshenko, who actively supported the Maidan protests before the February 2014 coup, said Saturday that the law on "the removal of the presidential title from Viktor Yanukovych" was unconstitutional.

This move sparked speculations that Poroshenko unintentionally agreed that the 2014 coup had been illegitimate.

"I believe that Poroshenko paves the way for his own future. After all, the decision of the Ukrainian [parliament] Verkhovna Rada on the removal of Viktor Yanukovych's presidential status was a precedent, which Poroshenko absolutely did not need," Denis Pushilin said.

"Making such a statement, he [Poroshenko] tries to nip at the root a possibility of a similar situation in relation to his own presidency. He understands that people, who in the future will come to power in Ukraine, will strongly criticize and condemn his actions as president. And I am sure that he is waiting for an even more disgraced future than Yanukovych."

Following the Ukrainian president's controversial remark, head of the Foreign Affairs Committee of the Lower House of Russia's parliament Alexei Pushkov said that it seems like even Kiev recognized that the overthrow of Ukraine's ex-president had no relation to law, while the EU and PACE both denied it.

The DPR envoy added that it was Petro Poroshenko who "did not only let the already difficult situation escalate to a military conflict, but he almost drowned the country in bloodshed."

000000
Popular comments
Yipeee!! Bye-bye Porky, don't let the door hit your ass on the way out and take that effing Yats with you when you go. Ding, dong the witch is dead, wicked old witch, the witch is dead!

Baybars
21 June 2015, 21:00 GMT
000000
Newsfeed
0
New firstOld first
loader
LIVE
Заголовок открываемого материала
Access to the chat has been blocked for violating the rules . You will be able to participate again through:∞. If you do not agree with the blocking, please use the feedback form
The discussion is closed. You can participate in the discussion within 24 hours after the publication of the article.
To participate in the discussion
log in or register
loader
Chats
Заголовок открываемого материала
Worldwide
InternationalEnglishEnglishMundoEspañolSpanish
Europe
DeutschlandDeutschGermanFranceFrançaisFrenchΕλλάδαΕλληνικάGreekItaliaItalianoItalianČeská republikaČeštinaCzechPolskaPolskiPolishСрбиjаСрпскиSerbianLatvijaLatviešuLatvianLietuvaLietuviųLithuanianMoldovaMoldoveneascăMoldavianБеларусьБеларускiBelarusian
Transcaucasia
ԱրմենիաՀայերենArmenianАҧсныАҧсышәалаAbkhazХуссар ИрыстонИронауОssetianსაქართველოქართულიGeorgianAzərbaycanАzərbaycancaAzerbaijani
Middle East
Sputnik عربيArabicArabicTürkiyeTürkçeTurkishSputnik ایرانPersianPersianSputnik افغانستانDariDari
Central Asia
ҚазақстанҚазақ тіліKazakhКыргызстанКыргызчаKyrgyzOʻzbekistonЎзбекчаUzbekТоҷикистонТоҷикӣTajik
East & Southeast Asia
Việt NamTiếng ViệtVietnamese日本日本語Japanese俄罗斯卫星通讯社中文（简体）Chinese (simplified)俄罗斯卫星通讯社中文（繁体）Chinese (traditional)
South America
BrasilPortuguêsPortuguese
NewsfeedBreaking
06:13 GMTGerman Chancellor Candidates in Focus as Tough Coalition Talks Loom
05:53 GMTBrexit to Blame: Germany's Olaf Scholz Says 'End to Freedom of Movement' Fueled UK Petrol Crisis
05:37 GMTUK Motorist Runs Over Knife-Wielding Man Amid Alleged Petrol Dispute - Video
05:23 GMTPatriarchy Strikes Back? Iceland's Historic Female-Majority Parliament Up in Smoke After Recount
04:43 GMTUS Marine Colonel Put in Brig For ‘Asking for Accountability’ Over US Departure From Afghanistan
04:03 GMTWitness Who Claims She Saw Prince Andrew Dancing With Giuffre at Club to Testify in Court - Report
03:24 GMTBennett Claims He Said 'No Three Times’ to President Biden During Their August Meeting
03:16 GMTRepublicans Slam DHS Chief Mayorkas for Allowing Thousands of Haitians Into US
01:37 GMTUS ‘Humiliated Like Never Before’, Trump Says, After DHS Allowed Thousands of Migrants to Pour in
01:31 GMTLockheed Martin to Build US Army’s Next Generation Tactical Vehicle Based System
01:10 GMTBorder Patrol Agents Disgruntled Over Biden's Attempts to Throw Them 'Under the Bus' - Report
00:53 GMTBeard-Check: Afghan Barbers Banned From Shaving, Trimming Beards - Reports
00:27 GMTR. Kelly Found Guilty: Will Artist Be Removed From Music Services?
00:03 GMTIs Sir Alex Ferguson Right, That Ronaldo, and not Messi, Could Score a Hat-trick for Anyone?
00:00 GMTUS Senator Menendez Urges New Sanctions on Turkey if It Acquires More Russian Weapons
YesterdayInsurgents Who Detained President of Guinea Declare Transitional Charter - Reports
YesterdayTexas Lawmakers Propose New Congressional Districts in Cities of Austin, Houston
YesterdayIOM Looking for Alternatives for Haitians at US Border, Brazil Being 1 Option - Sources
YesterdayCzech Republic Will Purchase Israeli-Made Air Defenses to Replace Soviet Gear
YesterdaySPD Leader Scholz Says Yet to Hear Congratulations From CDU/CSU Rival