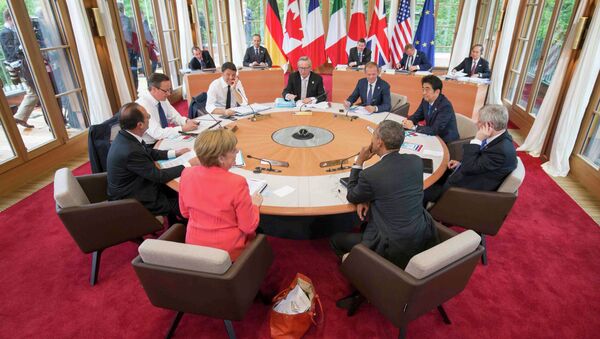 The Group of Seven held talks in Germany discussing the possibility of more sanctions against Russia, efforts to finalize the controversial Transatlantic Trade and Investment Partnership (TTIP) deal and reaffirmed support of the global coalition to counter Islamic State radicals.

G7 leaders reiterated their condemnation of Russia at the summit, over Moscow’s alleged meddling in Ukraine’s internal affairs. They reaffirmed their policy of non-recognition of Crimea's reunification with the Russian Federation.

Crimea seceded from Ukraine and reunified with Russia in March, 2014 following a referendum, where almost 100 percent of the peninsula's electorate expressed their wish to join Russia.

German Chancellor Angela Merkel said on Monday after a meeting with other G7 leaders that they "condemned the annexation of Crimea, which is against the international law."

Merkel explained that G7 leaders had agreed that the lifting of anti-Russia sanctions, imposed over Moscow’s alleged involvement in the situation in Ukraine, should be clearly linked to the implementation of the Minsk peace agreements signed in February. The agreements stipulate a ceasefire between independence supporters of Ukraine’s southeast and Kiev forces that launched a military operation against them in mid-April, 2014.

The West has been accusing Moscow of aiding independence fighters in Ukraine’s southeast, claiming that Russia has provided them with weapons. The claims have not been supported with any factual evidence and have been repeatedly denied by Russia, which has taken an active role in Ukrainian reconciliation talks.

Nonetheless, G7 leaders agreed that they stand ready to take further restrictive measures against Moscow in order to "increase cost on Russia, should its actions so require," says the final communique issued by the end of the summit.

US for Limiting Russia

In 2014, the United States, the European Union and some of their allies imposed economic sanctions on Moscow over its alleged meddling in the conflict in Ukraine’s southeast. Russia has repeatedly refuted the allegations, and retaliated by introducing a year-long embargo on food imports from countries that imposed sanctions against it.

Also in 2014, the G8 format became the G7 after the other nations voted to suspend Russia from the organization soon after the Black Sea peninsula of Crimea rejoined Russia following a referendum.

The possibility of imposing tougher sanctions against Russia was underlined by US President Barack Obama. At his final press-conference he said that the G7 discussed "additional steps" that might be needed to take "if Russia, working through separatists, double down on aggression inside of Ukraine." At the same time, he explained that these discussions were taking place at a technical level, not yet at a political one.

Despite the fact that the referendum was held in accordance with international law, it was not recognized by the West. Following the move, Western leaders cancelled their plans to attend the 2014 forum in the Russian resort of Sochi and held a meeting in Brussels instead.

At the Bavaria summit, the G7 expressed full support for the efforts to find a diplomatic solution to the conflict in southeastern Ukraine, particularly within the framework of the Normandy format and the Trilateral Contact Group talks.

Russia has participated in all of the Ukraine reconciliation talks, including the February Normandy format meeting in Minsk, which led to the breakthrough ceasefire agreement between Kiev and the self-proclaimed republics of Ukraine’s southeast.

The G7 has also reaffirmed its commitment to working together with international financial institutions to provide financial and technical support to Ukraine.

The club agreed to make every effort to finalize negotiations on the TPP as soon as possible, "as well as to reach agreement in principle on the EU-Japan FTA [free trade agreement]/EPA [economic partnership agreement] preferably by the end of the year," the summit’s final communique says.

According to the statement, the work on all TTIP issues, with the goal of finalizing an outline of an arrangement as soon as possible, preferably by the end of 2015, will be "immediately accelerated," as G7 leaders reaffirmed that their bilateral and regional FTAs would support the global economy.

G7 Leaders affirmed their commitment to reach a successful climate agreement in December at the UN climate conference in Paris, France. The climate treaty should enable all countries to follow a low-carbon, climate friendly development pathway in order to prevent a further rise in global temperatures.

"We are committed to the objective of mobilizing jointly $100 billion a year by 2020 for climate objectives as part of the Copenhagen Accord," German Chancellor Angela Merkel said at a press conference on Monday.

Leaders of Nigeria, Tunisia, Liberia and the African Union were invited to attend Bavaria's Schloss Elmau hotel as part of the seven leading economies' outreach program to non-G7 states. The African migrant crisis, religious extremism and economic growth in Africa constituted an essential part of the second day's agenda of the G7 summit.

G7 leaders reiterated their support for the UN-led efforts to find a political solution to the conflict in Libya, helping to form a national unity government amid continuing migrant influx to Europe from the North African state.

"We are extremely preoccupied about the increasing and unprecedented global flow of refugees, as recent tragedies in the Mediterranean illustrate the urgent need to address effectively this phenomenon," the summit communique says.

Some 1,800 asylum seekers fleeing conflict-torn North Africa and Middle East states in search of better life conditions have drowned in the Mediterranean Sea in 2015. This is a 20-fold increase over the same period in 2014. The European Union has established a naval mission to counter illegal migrant trafficking.

On Guard Against Islamic State

The G7 also reaffirmed its objectives of countering terrorism and extremism, particularly the Islamic State, a radical Sunni group that has taken control of vast areas in Syria and Iraq. An international US-led coalition has been launching airstrikes against IS in both countries since September, 2014.

"We welcome the continued efforts of the global coalition to counter ISIL/Daesh," G7 leaders said in their communique, adding that they reaffirm their "commitment to defeat this terrorist group and combatting the spread of its hateful ideology."

G7 club expressed support to all countries suffering from the effects of terrorist activity, including Iraq, Tunisia and Nigeria. According the G7 communique, the group’s members will take further action to freeze the terrorists' assets, also working to detect and prevent acts of terrorism.

IS affiliates have launched several terror attacks in Europe, and have become notorious for their kidnappings and public beheadings of European journalists.

The G7 talks were taking place against the backdrop of anti-summit protests. More than 7,500 people took part in rallies in the Garmisch-Partenkirchen resort town, just a few miles away from the G7 summit venue, despite tightened security. Around 17,000 policemen were brought in to bolster security for the summit.

Protesters walked through town caring signs and installations with slogans critiquing the G7 policy in relation to Ukraine, the Middle East and toward the migrant issue in the Mediterranean region.

Activist Gustavo Wagner told Sputnik that NATO wanted to expand through Ukraine by changing the political system in Kiev that would act in the interest of the European Union and NATO. Russia has repeatedly expressed concern over the buildup of NATO forces along its western borders, which started amid the escalation of the situation in Ukraine.

"Ordinary people wanted transparency in global policy when it came to such important matters as the US National Security Agency's (NSA) espionage in Europe."

The G7 summit was taking place in Bavaria, less than 60 miles from the notorious Bad Aibling monitoring station used by US spying agency NSA to eavesdrop on EU firms and officials.

A spying scandal erupted in the summer of 2013 after documents posted online by former US intelligence contractor Edward Snowden revealed that the NSA was spying on world leaders and even tapped Merkel’s private cellphone.