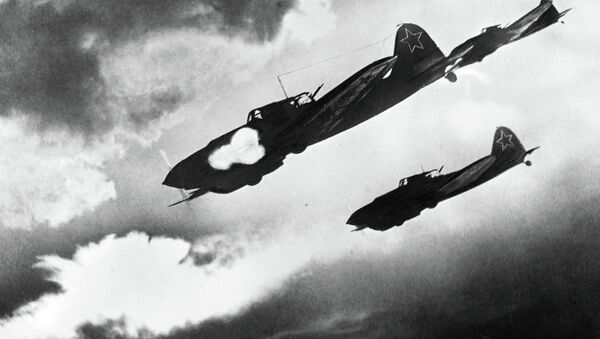 © Sputnik / Fedor
/
Go to the photo bank
Subscribe
Russia will challenge any attempts to rewrite the history of World War II, Russian Ambassador to the United States Sergei Kislyak said.

Misconceptions of WWII History Stem From State of Western Education
WASHINGTON (Sputnik) – According to Russian Ambassador to the United States Sergei Kislyak, who was speaking at an event at the embassy to commemorate the 70th anniversary of the Victory over Nazi Germany, both Russia and the United States have paid a great price for the victory. The Soviet Union was losing record numbers of people during the war, as many as 19,000 daily, according to the ambassador. Kislyak stressed that today's generation has to remember the events of the past in order to prevent them from happening again.

"In this respect, I'm so disappointed to see that in a number countries there are attempts to rewrite the history of the war, which is something we cannot accept and something we are going to fight," Kislyak said, expressing hope that the people of the United States would share this view.

Top officials of several countries recently made dubious statements regarding WWII. In January, Ukrainian Prime Minister Arseniy Yatsenyuk said during his visit to Berlin that Kiev "remembers about the Soviet invasion in Ukraine and Germany." Later that month, the Polish foreign minister dismissed Russia's role in the Soviet Army liberation of the Auschwitz concentration camp, claiming that the camp was liberated by Ukrainians.

A recent survey conducted by ICM Research for Sputnik News Agency showed that 24 percent of EU citizens polled were unable to say who had played a key role in changing the course of World War II. Only 13 percent of respondents said they believed the USSR shaped the outcome of the war.

Moscow has repeatedly voiced concerns over attempts to downplay the Soviet Union's role in the war.