Harper Government Furious and Curious Over Ex-PM's Meeting With Putin 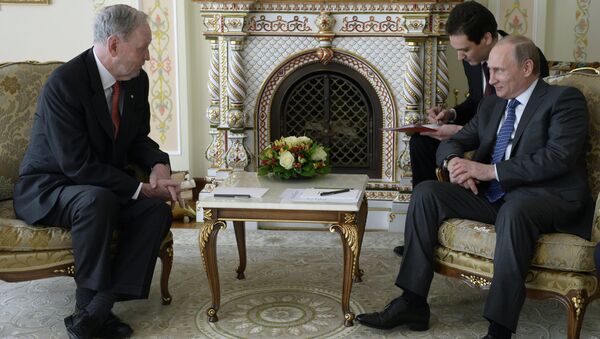 With the details of Former Prime Minister Jean Chrétien's meeting with Russian President Vladimir Putin yet to be revealed, Canadian conservative media and the government of Prime Minister Stephen Harper have had a field day criticizing the veteran Liberal politician.

Chrétien met with the Russian president for a brief face-to-face sit-down on Thursday on behalf of the InterAction Council, a group of former world leaders offering recommendations for solving global political, economic and social problems. The Kremlin has been tight-lipped about the meeting, noting only that the two leaders met west of Moscow at a government dacha, offering the very non-specific diplomatic statement that the two "exchanged views on today's situation in the world and pressing issues on the international agenda."

Since the meeting, the Harper government has demanded to know what the former prime minister told Putin.

Harper spokesman Stephen Lecce stated that "Mr. Chrétien was clearly not representing the Government of Canada at this meeting," adding that "our Government's position on the Putin regime is clear," using the pejorative to describe the Russian government.

Canadian Defense Minister Jason Kenney echoed Lecce, noting that he hoped Chrétien would peddle the Harper government's line on Putin, which is that he should 'get out of Ukraine'.

Canadian Journalist Calls on PM Harper to 'Get Out of Ukraine'
"I haven't been briefed on what happened. I'm not sure if Mr. Chrétien has chosen to brief our mission in Moscow. We would be curious to know what was discussed," Kenney noted. "All I can tell you is that the government of Canada has taken whatever opportunity we’ve had in meeting Mr. Putin, such as Prime Minister Harper’s brief encounter with him at the margins of the G20 in Melbourne, to be very clear about our insistence that Russia get out of Ukraine. We would hope that Mr. Chrétien would have taken — availed himself — of the opportunity to convey the same message," the minister added.

Conservative national newspaper The National Post piled on in criticizing the former PM, noting that his decision to meet the Russian president was "a slap" to the Harper government, adding that it was "an ill-chosen moment for him to be meeting with Putin, who figures at the heart of two of Canada's most vexing foreign-policy dilemmas," Ukraine and Syria, conflicts which Harper blames on Russia.

The paper insultingly implies that Chrétien had only gone to Moscow to feel prominent again. It notes that given his status as a figure "inextricably identified with Canada," Chrétien has a responsibility not to contradict Canadian foreign policy initiatives. "No doubt Chrétien disagrees with the Harper government’s foreign policy, as he does with much else it has done. That does not alter the fact that [he] represents elected authority." The paper concludes that "in going ahead with his visit anyway he diminishes his stature and offers poor service to the country he once led."

But ordinary Canadians, though divided by their political affiliations, have generally responded more positively to Chrétien's initiative:

@acoyne #cdnpoli - Only Chretien could go to Russia... lol.. Gravitas and direct language can do wonders.

Putin To Chretien: WTF is up with Harper? Chretien to Putin: I know eh.

Harper gov't displeased Jean Chretien met with Vladimir Putin. To anger them more he plans to meet with Canadian premiers.

The Chrétien-Putin meeting also sparked a debate about the former prime minister himself, with many nostalgically recalling him to be a direct, no-nonsense politician who isn't afraid of a fight, or even a bit of comedy at his own expense, in contrast to Harper.

Last month, Canada announced that it would be sending up to 200 personnel to train the Ukrainian military. Opponents of the move severely criticized the Harper government over the action, with La Presse journalist Lysiane Gagnon responding with the phrase "Get out of Ukraine, Mr. Harper!"