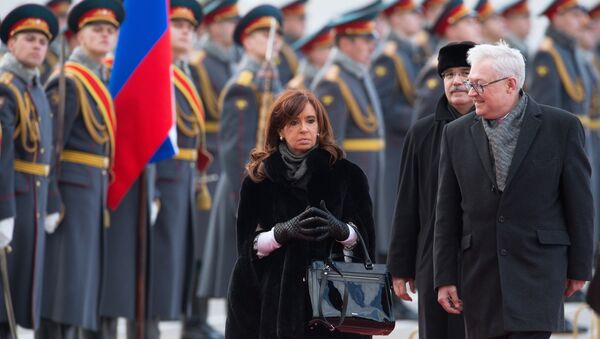 One of the top issues of Argentinian President Cristina Fernandez de Kirchner's official visit to Moscow will be the increase in bilateral food trade, according to the statement of Rosselkhoznadzor.

"Rosselkhoznadzor chief Sergei Dankvert will meet with Argentinian officials on Thursday in the framework of the Russia-Argentina Intergovernmental Commission on Trade and Science Cooperation to discuss the prospects of increasing the volume of bilateral food trade," Alexei Alekseenko, an aide to the head of the Federal Service for Veterinary and Phytosanitary Surveillance told RIA Novosti.

Alekseenko said that the volume of Russia-Argentina food trade in 2014 totaled $1.3 billion.

Russia, Argentina Experiencing Best Relations in History – Ambassador
In light of souring relations with the West in 2014 over the crisis in Ukraine, Moscow has significantly increased its trade and economic cooperation with the countries of Latin America, the BRICS and the Asia-Pacific region.

Earlier in 2014, Dankvert said that Russia expected to increase bilateral trade with Argentina to $3 billion in 2015, a significant increase from the 2013 $1.9 billion trade turnover.

During the April 23 meeting in Moscow, Russian President Vladimir Putin and Argentina President Cristina Kirchner are expected to discuss bilateral trade, the future development of economic ties, as well as an expansion of investment cooperation.