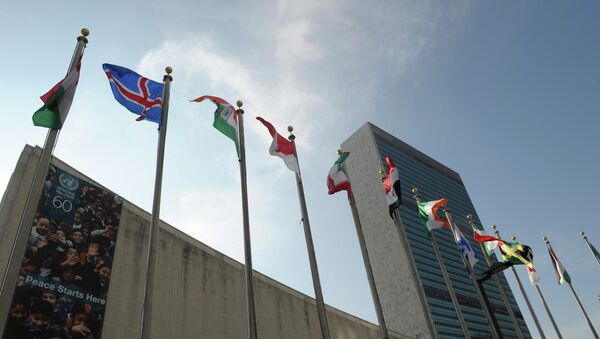 © Sputnik / Sergey Guneev
/
Go to the mediabank
Subscribe
International
India
Africa
Former UN Ambassador and Rideau Institute President Peggy Mason says that EU members states should be excluded from a UN peacekeeping mission in Ukraine because the EU became a party to the conflict after it imposed sanctions on Russia.

WASHINGTON (Sputnik) — European Union (EU) members states should be excluded from a UN peacekeeping mission in Ukraine because the EU became a party to the conflict after it imposed sanctions on Russia, former UN Ambassador and Rideau Institute President Peggy Mason told Sputnik.

“For obvious reasons it is usually advisable to avoid forces from countries who are party to the conflict,” Mason said on Tuesday. “However, this rules out most Western forces, members of NATO and CIS [Commonwealth of Independent States] members.”

Since the EU has imposed sanctions on Russia, she argued, non-NATO members like Sweden, who are in the EU, also raise concerns.

Mason, who trained NATO commanders on peacekeeping operations for six years, stressed that the mission will fail if the peacekeepers sent to Ukraine are not perceived as truly independent, and the actors involved are not committed to finding a peaceful outcome.

“The best option is under UN auspices to ensure appropriate oversight and expertise. Crucial to its success would be the viability of the broader peace agreement, with respect to which the ceasefire and withdrawal of heavy weapons are one part,” Mason said.

Ukrainian President Recalls Ambassador to US After Peacekeepers Request
Another risk, Mason underlined, is that both sides to the conflict may support a UN-led military peacekeeping force, but may resist a full-fledged mission with a civilian head.

This would be a tragic error, Mason warned, as the military and police elements can only provide the window of stability in which political problems can be solved.

“A full-fledged UN peacekeeping mission offers the best hope, in my view, of avoiding the ‘frozen conflict’ syndrome that we have seen in the South Caucasus,” Mason said.

The United States, she added, should be fully supportive of this approach given the lack of other viable options.

Earlier on Tuesday, the foreign ministers of Ukraine, Russia, Germany and France met in Berlin to discuss the conflict but failed to agree on whether to send peacekeepers to eastern Ukraine.

The OSCE Special Monitoring Mission in Ukraine is currently overseeing the implementation of the Minsk peace agreement, particularly the adherence to the ceasefire that came into force on February 15, and the withdrawal of heavy weapons from the line of contact between the Kiev government forces and independence fighters in Eastern Ukraine.

Russia's relations with Western countries deteriorated in 2014 over the Ukrainian crisis, with the West blaming Moscow for interfering in Ukraine's internal affairs, and imposing several rounds of sanctions. Russia has repeatedly denied interfering in Ukraine’s internal affairs and has expressed concern over Western encroachment along its borders.