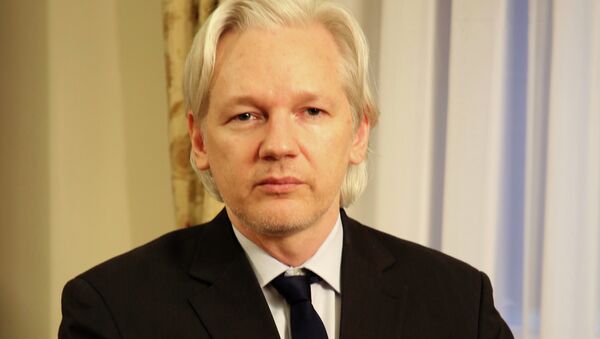 The videolink took place following a screening of Terminal F, a documentary about Snowden's journey from the United States to Moscow's Sheremetyevo airport via Hong Kong, at Rossiya Segodnya press center in the Russian capital.

Asked if Russian or Chinese secret services assisted or gave a green light to the NSA whistleblower, Assange, who was interviewed for the documentary, said that, to his knowledge, no intelligence services were involved.

The WikiLeaks founder stressed, however, the importance of Moscow's decision to provide asylum to Snowden in light of diplomatic pressure from the United States.

Assange noted that Moscow did not exert any pressure on the NSA whistleblower but instead acted in strict accordance with international law.

Assange expressed hope that Russia will continue to provide support to Snowden and will further extend the term of his stay.

In May 2013, Edward Snowden fled the United States to Hong Kong and then leaked data concerning the widespread and illegal global NSA surveillance programs. Washington accused Snowden of theft and the unauthorized distribution of classified information, a felony under the Espionage Act in the US.

In June 2013, Snowden arrived in Moscow's Sheremetyevo airport, staying in its international zone for over a month, before receiving a one year temporary asylum in Russia which was later upgraded to a residence permit valid until 2017.