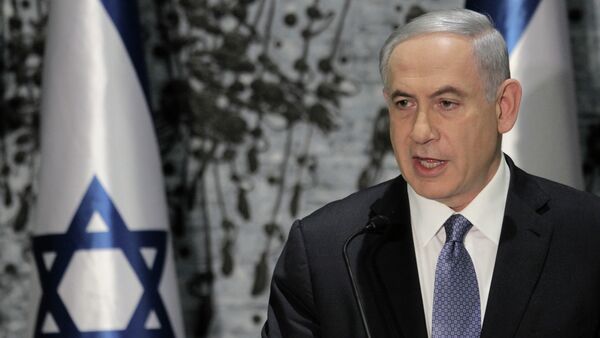 Israeli Prime Minister Benjamin Netanyahu said that the reaching of a deal on Iranian nuclear program would allow Tehran to develop such a program without even having to breach any provisions.

US May Reimpose Sanctions Against Iran if Nuclear Deal Violated - Obama
MOSCOW (Sputnik) — Israeli Prime Minister Benjamin Netanyahu warned that the reaching of a deal on Iran nuclear program would allow Tehran to develop its nuclear program without even having to breach any provisions, the Haaretz newspaper reported Sunday, citing a government source.

Iran has been suspected of developing a nuclear weapon under the guise of a civilian program. The Israeli leader is among the most prominent opponents of the deal which would ease up sanctions against Iran in exchange for Tehran making its nuclear program more transparent.

According to the source, Netanyahu said during a meeting of the security cabinet it would be "impossible to catch the Iranians cheating simply because they will not break the agreement.”

The prime minister reportedly argued that the world powers would stop monitoring Iran's nuclear activities closely in 10-15 years after the deal is signed. Thus, Iran would have the chance to continue its alleged work on the development of a nuclear weapon.

Netanyahu to Obama: Iran Nuke Deal Threatens Israel’s Survival
The meeting of the Israeli security cabinet was called following the signing of a framework agreement on Iranian nuclear program earlier in April. Iran and six world powers, including Russia and the United States, have agreed to sign a long-term deal till the end of June.

Under the agreement, The United Sates, the European Union and the UN Security Council would partially lift their nuclear-related sanctions following a confirmation by the International Atomic Energy Agency (IAEA) of Tehran's compliance with the deal.

Last month, Netanyahu held a speech at the US Congress in an attempt to thwart the deal he says is dangerous for the Middle East security.