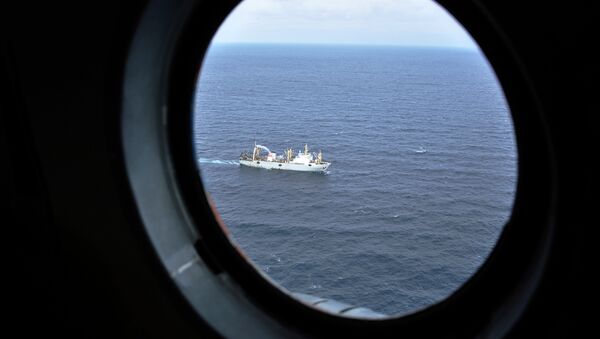 © AP Photo / Russian Emergency Situations Ministry Press Service
Subscribe
New, revised data shows that 57 people have died as a result of the Dalniy Vostok fishing trawler sinking in the Sea of Okhotsk, while 12 remain missing, the Chief of Maritime Rescue from the port of Petropavlovsk-Kamchatsky, Artur Rets, told RIA Novosti on Friday.

Thirteen Missing After Ship Sinks; 22,000 Square Miles of Sea Searched
VLADIVOSTOK (Sputnik) – The Dalniy Vostok fishing freezer trawler sank in the Sea of Okhotsk shortly before midnight on April 1. There were 132 people on board the vessel. Rescue teams have lifted a total of 119 people from the water.

Previous reports said that 56 people from the trawler had died as a result of the accident, while 13 remained missing.

"Initially, the bodies were not counted correctly; two bodies were placed in the same container. So, as of today, 12 people are considered missing," Rets said.

The Far East division of the Russian Emergencies Ministry confirmed with RIA Novosti that a mistake had indeed been made in counting the dead bodies.

"The mistake in calculations happened because there were a lot of people taking part in the [search and rescue] operation, new information kept coming in," an Emergencies Ministry representative said.

Ukrainians were on board of the "Dalniy Vostok" fishing trawler sinked in the Sea of Okhotsk — http://t.co/jLrkHVRu6q pic.twitter.com/TgP3mzKA7A

Five residents of Russia's Sakhalin Region missing after the sinking of the Dalniy Vostok fishing trawler in the Sea of Okhotsk have been declared dead, local authorities announced in a statement.

Their families will receive one million rubles (about $19,130) each in compensation, according to the statement, which added that the 17 Sakhalin residents that survived the accident have been paid 200,000 rubles ($3,825) each.

Two ships carrying survivors of the accident and the bodies of the dead arrived in the port of Korsakov, a town located in Russia's Sakhalin Region, in the early hours of Tuesday. Some of the survivors are still being treated at regional hospitals, but are expected to be released next week.

On Saturday, acting Sakhalin governor Oleg Kozhemyako said that the sinking of the Dalniy Vostok trawler was likely caused by the crew's failure to comply with safety regulations. A criminal case has been opened and an investigation into the accident is underway.