What Passover Festival Symbolizes and How It is Celebrated 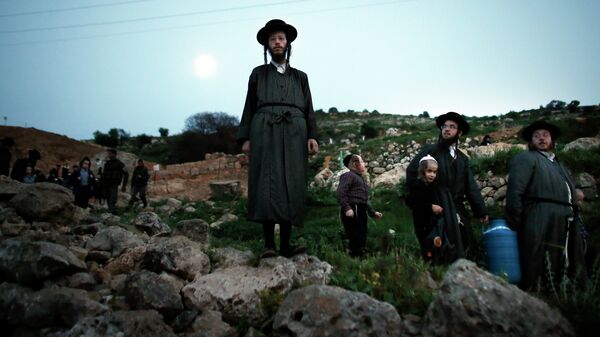 MOSCOW (Sputnik) — Passover is considered to be the most ancient Jewish holiday marking the historical events that laid the foundations of Israelites as a free nation, their Exodus from Egypt and liberation from slavery.

The religion of Judaism is based on the memories of the Exodus and the ensuing search for the Promised Land and the formation of an independent Jewish state.

In biblical times, the Passover celebrations involved a pilgrimage to the Temple in Jerusalem, sacrificial offerings and a feast, which included a Passover lamb. Passover is believed to have originated as a merger of two older festivals celebrated by cattle- and crop-growers. In the biblical period, it came to be associated with liberation from Egyptian slavery. 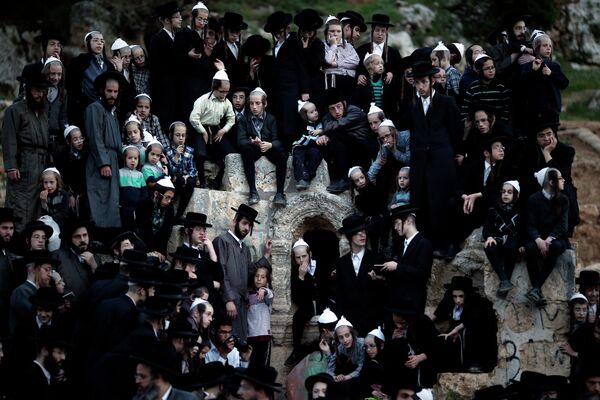 Ultra-Orthodox Jews collect water from a mountain spring near Jerusalem to be used in baking unleavened bread, known as Matzoth, during the Maim Shelanu (Rested Water) ceremony on April 2, 2015.
© AFP 2023 / THOMAS COEX

As the tradition goes, the word "pesach" is derived from "passed" ("pasakh" in Hebrew). The Jewish God is explained as having passed by Jewish homes when punishing Egyptians for the Pharaoh's refusal to free the Jews. In Jewish prayers (siddur), the Pesach is called "the time of our freedom."

The Torah, the primary Jewish religious text, refers to Passover as "the feast of unleavened bread" because Jews are supposed to eat this bread, known as matzo. Consumption or even the storage of any leavened food (chametz) at home is strictly forbidden.

The holiday starts on the eve of Nisan 15 (March and April) according to the Jewish lunar calendar and lasts seven days in Israel and eight in the diaspora. A special announcement is made every year regarding the Passover dates in accordance with the Gregorian calendar.

The Torah describes in detail the procedures for celebrating Passover. Leavened foods are prohibited throughout the holiday. This is the type of food that the Israelites could not take with them when leaving Egypt. During Passover, Jews abstain from all products that are made using the process of fermentation. Malt liquors, beer and other alcohol made from yeast is banned. 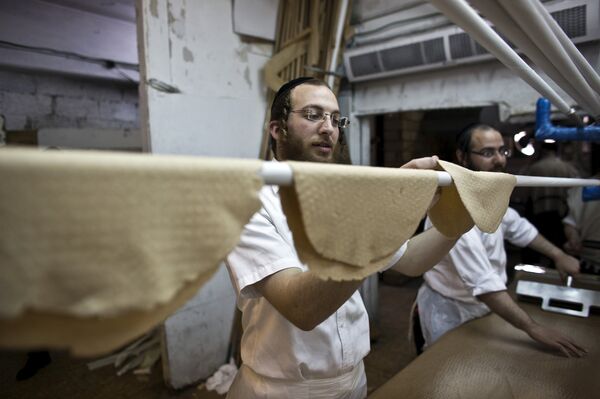 An ultra-Orthodox Jewish man places kneaded dough on a stick before it is placed in the oven to prepare matza, the traditional unleavened bread eaten during the Jewish holiday of Passover, in Bnei Brak near Tel Aviv
© REUTERS / Nir Elias

The only bread allowed during Passover is matzo or unleavened bread made from flour that the enslaved Jews ate in Egypt and during the Exodus. Matzo should be baked within 18 minutes, after water has been added to the flour. The flour can be made from the five grains mentioned in the Torah: wheat, rye, barley, oats or spelt.

Matzo serves as a reminder of the Jews departure from Egypt. Having received the permission of the Pharaoh to leave, the Jews appropriately rushed away in haste and there was no time to allow the dough to rise, so they baked unleavened bread.

Passover culminates with Seder ("order") on the first evening of the holiday (the first two evenings in the diaspora). Seder begins upon returning from the synagogue when family and guests gather at a table. During Seder, they pronounce the blessings established by the rules, read prayers and sing psalms.

It is mandatory to invite all needy people and those who cannot mark the holiday with their family to take part in the feast. Jews put on the table the best dishes and silverware, candles, kosher wine, three big pieces of matzo and a decorated cup meant for Prophet Elijah.

During Seder, Jews read the Haggadah, a text that sets forth the order of the Seder telling the story of the Exodus as described in the Torah, and eat symbolic dishes. These include matzo, bitter herbs known as Maror (lettuce, basilica and horse radish) and Hazereth (grated herbs), which symbolize the bitter life in Egyptian slavery, as well as a blend of chopped nuts, apples and wine known as Haroseth, representing the mortar mixed by the Israelites during their slavery in Egypt. During the meal, they put herbs into salty water symbolizing the tears shed by the Israelites during slavery and the sea they crossed during the Exodus. 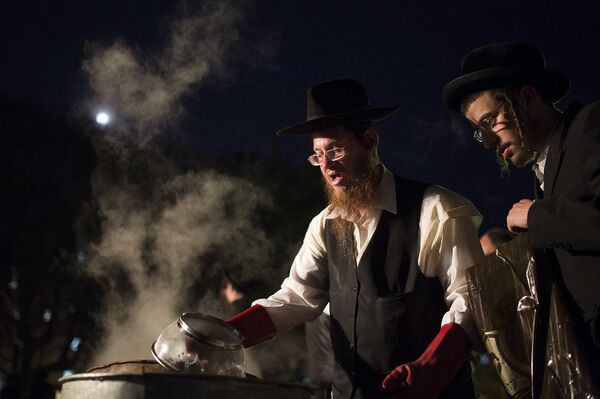 During the meal, Jews drink four glasses of red wine to symbolize the four promises given by the Jewish God to the people of Israel: "… and I will bring you out from under the burdens of the Egyptians, and I will deliver you from their bondage. I will also redeem you with an outstretched arm and with great judgments."

According to tradition, a fifth glass of wine is reserved for the Prophet Elijah, who will return to Earth on the eve of Passover to announce the advent of the "great and awesome Day of the Lord." No one drinks from this glass, it is simply left on the table. In the Jewish religion, the Prophet Elijah is the messenger of the Messiah. When the Messiah comes, all Jews will return to The Land of Israel, or Eretz Yisrael.

There is also a tradition to hide a piece of matzo (Afikomen) during Seder and let children search for it. Once found, the Afikomen is eaten at the end of the meal that is finished with a greeting: "Next year in Jerusalem!"

All kinds of work are banned on the first day of Passover, as a service is held in synagogues to mark the occasion. The five following days are "regular days of the holiday" and considered working days. During these days, a priestly blessing takes place next to the Wailing Wall in Jerusalem. 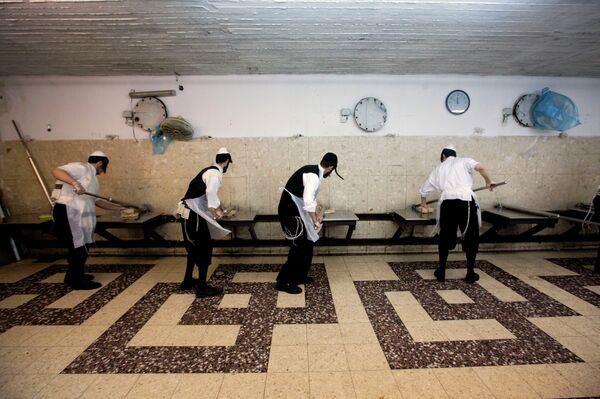 The seventh day of Passover completes the festivities and is considered a day off. It is celebrated in a joyful atmosphere, with singing and dancing. At midnight, a ceremony of the "Splitting of the Red Sea" is held in synagogues and at religious schools. The eighth day of Passover is only celebrated by the diaspora where the first two days and the final two days are regarded as holidays.