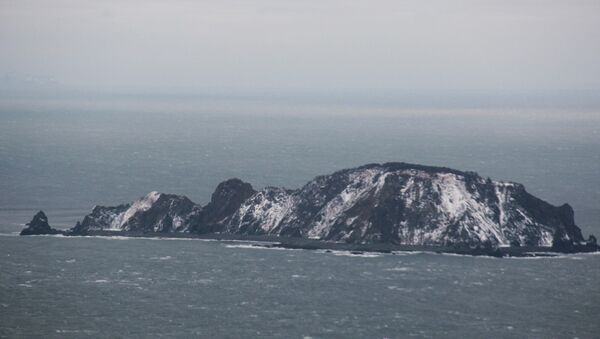 © Russian Emergency Situations Min
/
Go to the photo bank
Subscribe
Thirteen crew members of the Dalniy Vostok fishing trawler, which sank in the Sea of Okhotsk on Wednesday night, are still missing and their fate is unknown.

"In total, we have searched through over 10,000 square kilometers [about 6,200 square miles], the work continues," deputy head of the Far East division of the Russian Emergencies Ministry said.

The trawler's captain has been identified among the victims of the accident, according to the source.

Dozens Dead as Russian Trawler Sinks in Okhotsk Sea
A representative of the Far East division of the Russian Emergencies Ministry told RIA Novosti on Friday that 65 Dalniy Vostok crew members have been identified so far.

"The identities of 65 people have been established, 61 of them are survivors (37 Russians and 24 foreigners), while another four are Russian citizens who died [in the accident]. The identification continues," the representative said.

The Dalniy Vostok trawler sank in the Sea of Okhotsk shortly before midnight on Wednesday, around 300 kilometers, or 186 miles, from the Russian port city of Magadan. There were 132 people on board the vessel. Rescue teams have lifted a total of 119 people from the water, 56 of them had died. The fate of the remaining 13 remains unknown.

A representative of local authorities told RIA Novosti on Friday that the owner of the trawler, Magellan LLC, plans to pay compensation to the families of the victims and will cover the cost of transporting the bodies home.

Russian President Vladimir Putin offered his condolences to the families of those who died in the accident on Thursday.