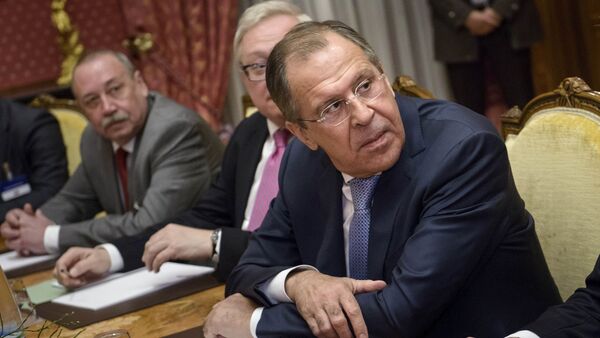 Sticking Points Remain Between P5+1, Iran on Tehran Nuclear Program – Zarif
DUSHANBE (Sputnik) – “The issues that are now being decided are close to being agreed upon, literally the final steps, and even baby steps, remain to be agreed upon,” Lavrov told journalists in the capital of Tajikistan.

Earlier in the day, Iranian Foreign Minister Mohammad Javad Zarif said in Lausanne, Switzerland, where nuclear talks are ongoing, that sticking points remain in the negotiations.

Iran and P5+1 countries, comprising Russia, the United States, France, China, the United Kingdom and Germany, have been trying since November 2013 to reach a deal that would ensure the peaceful nature of Tehran's nuclear energy program.

Iran, P5+1 'In a Few Meters' From Agreement - French Foreign Minister
The current negotiations in Lausanne started on March 19 to agree upon a political framework for a comprehensive deal on Tehran's nuclear energy program. Iran and the P5+1 group of international mediators were supposed to reach the framework deal Tuesday. As of Thursday the talks continue.

The deadline for reaching a final comprehensive agreement on Tehran's nuclear energy program has been postponed several times, with most recent one set for July 1, 2015.