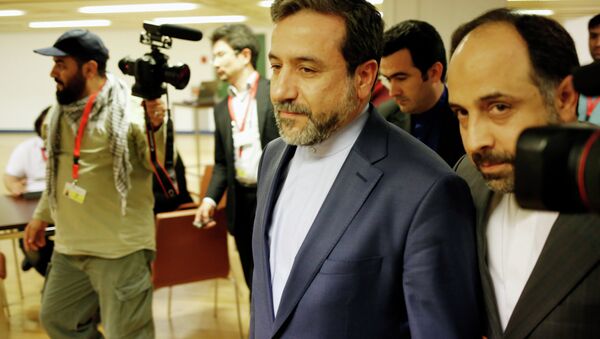 US, Iran Can Improve Relations for First Time in Decades
LAUSANNE (Sputnik) — Participation of the International Atomic Energy Agency (IAEA) representatives may be needed at later stages of the ongoing nuclear talks, Tehran’s envoy to the talks told RIA Novosti Friday.

“We have not discussed it so far, but the need may arise in future,” Abbas Araghchi said.

Araghchi also said there have been no arrangements for a meeting of Iran’s Foreign Minister Mohammad Zarif with European colleagues in Lausanne yet.

Earlier media reports suggested that the foreign ministers of France, Britain and Germany had plans to hold talks with the representatives of the Iranian delegation on Saturday morning.

Zarif Says No Need for All P5+1 FMs' Presence at Nuclear Talks So Far
"Nothing has been decided yet, there is no such agreement," Abbas Araghchi said.

For over a year now, Iran and the P5+1 group of international negotiators, comprising Russia, the United States, China, the United Kingdom, France and Germany, have been conducting negotiations in order to reach a long-term nuclear deal guaranteeing the peaceful nature of Tehran's nuclear program. The final agreement is scheduled to be reached by July, 2015.

The current round of Iranian nuclear talks began on Sunday in Lausanne, Switzerland and will last until March 21.

Early in February, Iran’s Foreign Minister Zarif had talks with IAEA Director General Yukiya Amano. The sides agreed on the importance if continuing the dialogue between the agency and Tehran at all levels.