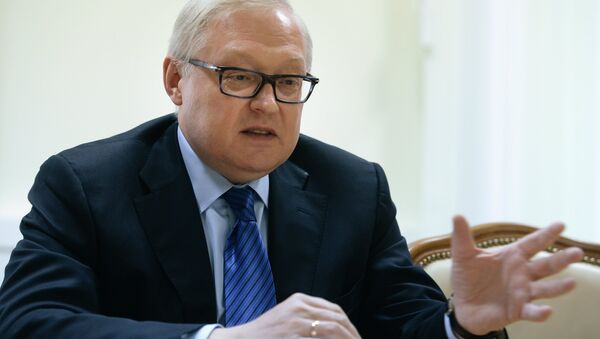 © Sputnik / Valeriy Melnikov
/
Go to the photo bank
Subscribe
Russia’s Deputy Foreign Minister said that Russia continues to look for a viable solution for the Iranian nuclear problem and is seeking to deepen its cooperation with Tehran.

GENEVA (Sputnik) — Russia continues to look for a viable solution for the Iranian nuclear problem and is seeking to deepen its cooperation with Tehran, despite allegations that it has lost interest in the Islamic Republic, Russia’s Deputy Foreign Minister Sergei Ryabkov said Monday.

“I’d like to underscore that – despite some media allegations that Russia is seemingly losing interest in an [Iranian nuclear] agreement – we are still working as before, meaning we are still aimed at finding common ground and most importantly at ultimately safeguarding the interests that Russia has been vying to defend throughout this negotiations process,” Ryabkov said.

Ryabkov said Russia was specifically interested in “restoring trust in a purely peaceful character of the Iranian nuclear program that could be verified” without undermining the international agreements on non-proliferation of weapons of mass destruction, and on top of all, in “expanding our bilateral ties with Iran, boosting our cooperation with this country in the nuclear energy sphere.”

He stressed Russia was exploring its opportunities of stronger ties with Iran in close contact with other member countries of the P5+1 group of international mediators. “We see no contradictions in that,” Ryabkov added.

Ryabkov emphasized that a joint effort to “speed up the suspension and ultimately the end of the existing sanctions against Iran will benefit the situation in the Middle East”. He added that the progress made in the Iranian nuclear talks since the start of this year “gives us a lot of hope”.

Ryabkov noted that the negotiations of P5+1 group on Iranian nuclear program are not currently being planned.

"Next week's negotiations will take place along the same line as they have in the past few days, as far as I understand. In the beginning of the week foreign ministers of several countries will hold meetings on their level, bilateral or other formats, but I emphasize that the ministerial meeting of the P5+1 with Iran is not being planned," Ryabkov said.