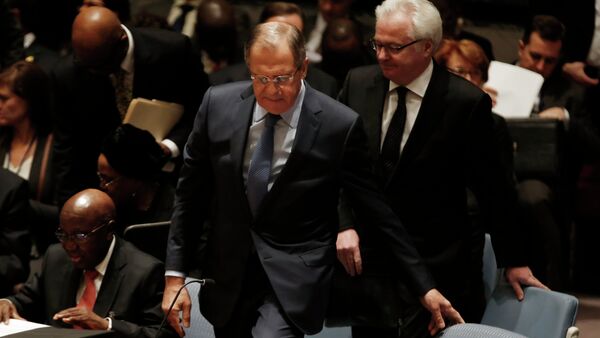 Lavrov Warns Against Using UN Security Council for Propaganda
UNITED NATIONS (Sputnik) – Russia's Foreign Minister Sergei Lavrov on Monday warned that information warfare was "poisoning" relations between countries and called on international news agencies not to abuse freedom of speech for the sake of spinning their reports.

"The international atmosphere is being heavily poisoned by the escalating information warfare that uses global mass media, Internet and social networking. This war is being waged in violation of all rules and moral principles by those who have abundant financial and technical resources," Lavrov said at the UN Security Council's open meeting.

The Russian foreign policy chief stressed that "freedom of speech and expression should not be used to justify news spin, brainwashing, and subversive attacks aimed at sovereign states, their institutions and policies, or to incite religious hatred," the foreign minister stressed.

Earlier this month, German Chancellor Angela Merkel dragged the role of propaganda in the Ukraine crisis into the spotlight, saying that what shapes public opinion needs to be looked at in detail. She also admitted that coverage of the conflict differed significantly from country to country.

Different perceptions of the reasons behind the unfolding conflict in eastern Ukraine have widened a rift between Russia and the West, with Brussels and Washington accusing Moscow of being the driving force behind militias in Ukraine's southeast. Russia has denied this allegation.