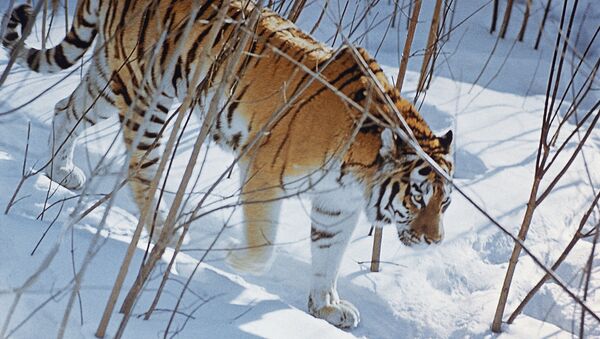 Conservation efforts are bearing fruit, with the latest census showing that the number of Siberian leopards and tigers has increased.

Putin’s Tiger Kuzya Returns Home
A census of big cats in Russia's Far East which began on January 31 has found that the numbers of Siberian leopards and tigers, once on the brink of extinction, are increasing, but more work is needed to secure their future.

"The population of leopards today in the Far East is 57, which is a lot more than a few years ago, when we spoke of a population of 30-35 animals. Experts suggest a level of 100-120 would ensure their conservation, and we are continuing this work," Primorsky Province Governor Vladimir Miklushevsky told RIA Novosti.

The big cat census involved the efforts of more than 800 people; one is carried out once every ten years. At the last count in 2004/5 the number of Siberian tigers, the world's largest cats, was stable at more than 450, having previously been on the brink of extinction. The tigers, which once roamed across northern China, the Korean peninsula and throughout the Russian Far East, are now confined to the Primorsky and Khabarovsky provinces of Russia's Far East. Once numbering in the thousands, by the 1940s hunting and the destruction of forests had decreased their population in the wild to no more than 40. The subspecies was saved from extinction after Russia became the first country in the world to grant the tiger full protection.

Four Rare White Tiger Cubs Born in Japanese Zoo (VIDEO)
It is hoped that similar progress can be made with the Siberian leopard, which the WWF warns is "teetering on the brink of extinction" due to poaching and the loss of its habitat. To this end, in 2012 the Russian government declared a new protected area for the leopard, called the Land of the Leopard National Park, which comprises 650,000 acres.

On Monday it was announced that the tigers residing in Primorsky province's Tiger Rehabilitation Center are to be joined by Tikhon, who last year ended up out of his usual wild habitat in a village in Khabarovsky Province. Tikhon, who is two and a half years old, attacked the pets of local residents and gave them quite a fright when he appeared there in November. Officials at the Rehabilitation Center, located at the Primorsky Safari Park, said that Tikhon now "practically does not fear people," and as such releasing him into the wild would be dangerous.