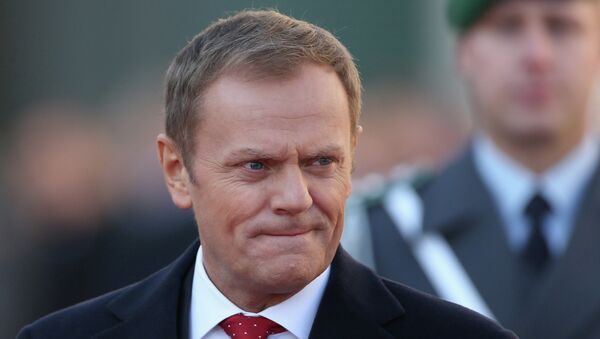 © Fotobank.ru/Getty Images / Sean Gallup
Subscribe
President of the European Council Donald Tusk stated that the European Union could introduce further restrictive measures against Russia if necessary, but was not planning on any additional sanctions at the moment.

Postponed Anti-Russia Sanctions to Come Into Force as Planned - Merkel
BRUSSELS (Sputnik) – President of the European Council Donald Tusk has announced that the European Union has not been discussing any new anti-Russia sanctions over the situation in Ukraine.

Speaking following an informal summit of EU leaders in Brussels on Thursday, Tusk said the European Union could introduce further restrictive measures against Russia if necessary, but was not planning on any additional sanctions at the moment.

Meanwhile German Chancellor Angela Merkel told reporters that fresh EU sanctions could be enforced if the ceasefire agreement reached in Minsk is not fully implemented.

No Immediate Need for Further Russia Sanctions - French Foreign Minister
Merkel also said that the sanctions that the European Union had come up with over the escalation of violence in the southeast Ukrainian city of Mariupol and that EU foreign ministers later postponed will come into force on February 16. The restrictive measures include sanctions against nine entities and 19 individuals, including five Russian citizens.

The European Union, the United States and their allies have introduced several rounds of sanctions against Russia over its alleged involvement in the Ukrainian crisis, without presenting any factual evidence to back the claim. The restrictive measures target Russia's banking, defense and energy sectors.

Russia, which has acted as one of the mediators in various formats of Ukraine reconciliation talks, has repeatedly stressed that sanctions are counter-productive and hurt not only the target country, but those using the measure as well.