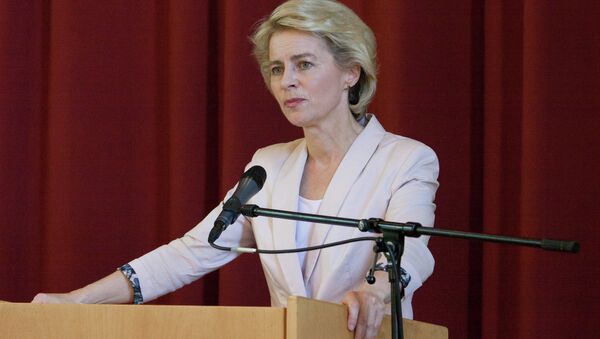 The German defense minister said Friday that arms deliveries to crisis-hit Ukraine could become a catalyst of the conflict and push the peaceful process back.

Putin-Merkel-Hollande Talks on Ukraine May Influence Anti-Russia Sanctions
MUNICH (Sputnik) — Giving lethal weaponry to crisis-hit Ukraine would only hamper efforts to find a peaceful solution to the ongoing deadly standoff between Kiev and the self-proclaimed independent regions in the southeast of the country, the German defense minister said Friday.

"I am convinced that arms deliveries could become a catalyst [of the conflict], and push the desired solution even further back," Ursula von der Leyen said, in a speech at the Munich Security Conference.

The Munich Security Conference is an annual event that brings together some of the world's top policy makers in foreign and defense policy. This year's conference largely focuses on the deadly standoff between Kiev and self-proclaimed Donetsk and Luhansk people's republics in eastern Ukraine.

Earlier this month German Chancellor Angela Merkel stated that her country would not provide weaponry to Ukraine, underscoring the need for a diplomatic solution.

Finnish President announced earlier this week that his country would not provide lethal aid to Kiev.

Russian President Vladimir Putin, French President Francois Hollande and German Chancellor Angela Merkel are currently holding talks on a new plan to settle the Ukrainian crisis in Moscow. The French and German leaders visited Kiev prior to coming to Moscow, where they discussed new proposals with President Petro Poroshenko.

Despite the ceasefire agreement reached by the independence supporters and Kiev in 2014, military clashes have intensified in southeastern Ukraine since the beginning of this year. The warring sides have traded blame for numerous civilian deaths.