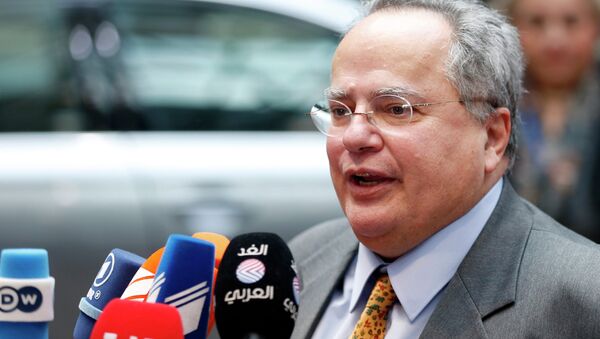 Minister for Foreign Affairs of Greece Nikos Kotzias commented on the EU's decision to keep in force the existing sanctions on Russia, saying that the sanctions had not had the anticipated results, but had brought economic problems to a number of European states, including Greece.

EU FMs Decide to Extend Individual Sanctions Over Ukraine Until September
BRUSSELS, January 29 (Sputnik) — The European Union should start dialogue with Moscow instead of imposing new sanctions on Russia over its alleged role in the Ukrainian crisis, Minister for Foreign Affairs of Greece Nikos Kotzias said Thursday.

The EU foreign ministers adopted on Thursday a decision to keep in force the existing restrictions targeting individuals and entities allegedly involved in the escalation of the Ukrainian crisis until September 2015, but stopped short of imposing new sanctions.

Czech Official Says EU Waits for Greece’s Decision on Anti-Russia Sanctions
Speaking after an extraordinary EU Foreign Affairs Council meeting in Brussels, Kotzias emphasized that sanctions against Russia did not have the anticipated results, but brought economic problems to a number of European states, including Greece.

"We are against the introduction of new sanctions at present," the minister said.

The Greek delegation stated at the meeting that the phrase stipulating introduction of new sanctions against Russia should be removed, otherwise the work will not move forward, Kotzias stressed.

EU to Consider Expanding Anti-Russian Sanctions Blacklist on Thursday
"In the end we agreed on a communique, which does not provide for the introduction of new sanctions against Russia. What it provides is an extension of earlier imposed sanctions, which will expire in September," he added.