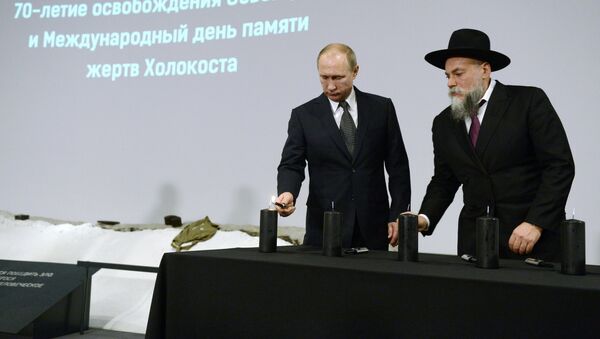 © Sputnik / Alexei Nikolsky
/
Go to the photo bank
Subscribe
Russian President Putin said that 70 percent of the Red Army personnel were Russian adding that it is the Russian people who made the biggest sacrifice for the victory in the WWII.

"Of course, the Russian people suffered the most in the fight against Nazism. Seventy percent of the Red Army personnel were Russian. It is the Russian people who made the biggest sacrifice for the victory," Putin said, at an event honoring the victims of Holocaust.

The Russian president noted that more than half a million Jews had been the members of the Red Army, making a significant contribution to the victory over the Nazis.

European Partisan Group Frustrated Putin Not Invited to Auschwitz
Putin added that it was important to remember that many nationalities had contributed to the fight against Nazism.

On Monday, Putin said that any attempts to revise Russia's contribution to the victory in the fight against Nazism during the World War II should be viewed as a glorification of Nazi crimes.

He emphasized the importance of defending the truth about the events of the World War II, so that the tragedies of the war would not be repeated in the future.