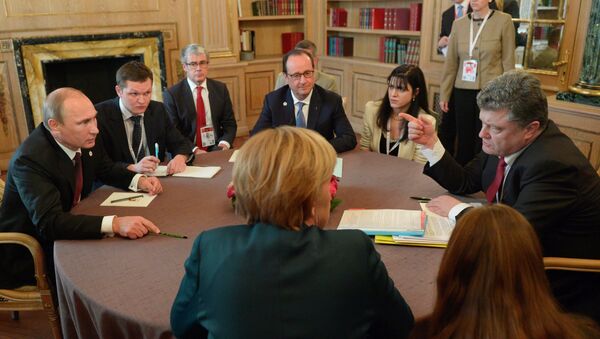 Germany’s deputy chancellor has warned against imposing further sanctions on Russia, saying that destabilising the country would pose a danger to Europe.

Sigmar Gabriel, who is also Germany's economy minister, was quoted in German newspaper Bild am Sonntag that it wasn't in either Germany's or Europe's interest to see the Russian economy collapse.

"The goal was never to push Russia politically and economically into chaos," he said."Whoever wants that will provoke a much more dangerous situation for all of us in Europe."

He said that the aim of the sanctions was to engage Russia in negotiations over the current situation in Ukraine.

"We want to help solve the conflict in Ukraine, not to force Russia to its knees," he said.

However, Moscow has continually denied these allegations, arguing that the sanctions are counterproductive.

Mr. Gabriel's comments follow those of fellow German politician, Foreign Minister Frank-Walter Steinmeier, who in December expressed concern about the potential effects of the sanctions on Russia, and warned against "turning the screw" with further punishments.

"It cannot be in our interests that this runs out of control," he said. "We need to keep this in mind in our sanctions policy."

The statements from the German ministers suggest a possible softening in Germany's, and the EU's stance on Russian sanctions, with many European Union economies also experiencing significant economic issues as a result of the economic sanctions and Russian counter-measures.

The latest statistics from Markit/CIPS Index showing ‘near stagnation' in the Eurozone and slipping production in the UK are explained, among other things, by the crisis in Ukraine which has made many companies risk-averse.

On Monday 5 January Berlin will play host to a fresh round of talks on Ukrainian settlement between senior diplomats from Russia, Ukraine, France and Germany.  They are in preparation for the so-called Normandy format talks between German, French, Russian and Ukrainian leaders that are expected to take place on January 15 in the Kazakh capital of Astana.