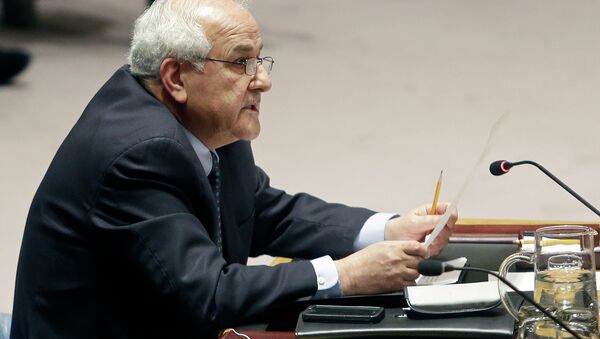 © AP Photo / Frank Franklin II
Subscribe
International
India
Africa
Following a meeting with the Assistant Secretary-General for Legal Affairs, Palestinian ambassador said he had submitted a total of 18 documents signed by the Palestinian authorities to the UN. Palestinians chose to join the ICC to seek justice for the victims of Israeli occupation, he said.

Following his meeting with Stephen Mathias, Riyad Mansour told journalists that in accordance with the international regulations, Palestinian Autonomy will become ICC's 123th member in 60 days. He added that he submitted a total of 18 documents signed by the Palestinian authorities to the United Nations. He also stated that Palestinians chose to join the ICC to seek justice for the victims of Israeli occupation.

Palestine's Abbas Signs Request to Join ICC After UN Bid Failure
On Wednesday, Palestinian President Mahmoud Abbas signed a request to join the ICC as well as about 20 other international organizations, after UN Security Council failed to pass the resolution on the creation of an independent Palestinian state. The Palestinian ICC membership bid is an attempt to continue to seek the adoption of UN Security Council resolution on ending the occupation of Palestinian territories by Israel. Abbas also said that he is going to use the ICC membership to sue Israeli politicians and military.