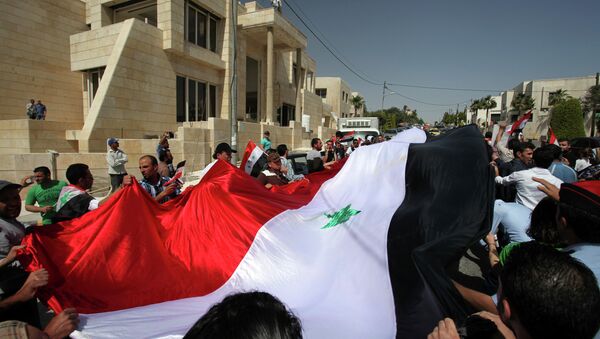 © AP Photo / Mohammad Hannon
Subscribe
Secretary General of the Syria Homeland Party (Souria Al Watan) said on Thursday that the date of the peace talk between Syrian government and opposition representatives had not been set yet, but they could begin in Moscow on January 22 or 26.

"The date of the meeting has not been set yet, but there are talks about late January, maybe 22 or 26," Niazi said.

Negotiators to represent the Syrian opposition are likely to be picked after the date is set, she added.

Meeting of Syrian Gov't, Opposition Planned in Moscow in January: Ministry
Earlier on Thursday, the Russian Foreign Ministry stated that the upcoming meeting is not to replace the Geneva reconciliation process and is aimed at paving the way for broader dialogue.

The first United Nation-backed conference on Syria was held in Geneva in the summer of 2012 and the second took place in early 2014, though both failed to yield significant results.

During talks with UN's Syria envoy Staffan de Mistura in October, Russian Foreign Minister Sergei Lavrov called for resumption of reconciliation talks on Syria. Moscow later offered to host a meeting between representatives of the Syrian government and opposition.

A civil war has been raging in Syria since 2011, when anti-government protests transitioned into an armed uprising. Syria's Armed Forces are currently battling a number of insurgent groups, with Islamic State jihadists being the most prominent.