Next Round of Ukraine Reconciliation Talks Scheduled for Friday: Reports 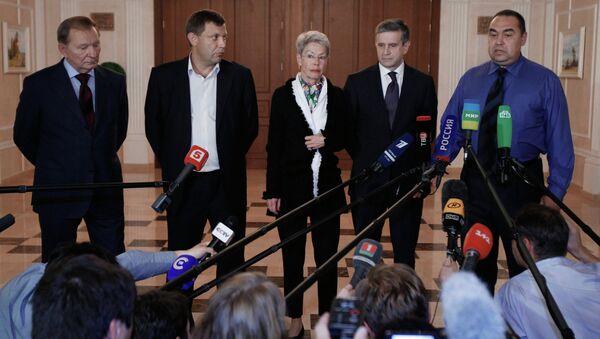 The next round of the three-party Contact Group talks will be held as planned on December 26, Ukrainian National News reported, citing a source, taking part in organizing negotiations. The talks will reportedly be closed off to the media.

Meanwhile, the Belarusian Foreign Ministry has not confirmed the reports that negotiations will take place on Friday.

"As soon as the date of the meeting is fully agreed to, you will be notified," a source in the ministry told RIA Novosti on Thursday.

The Contact Group comprises representatives from Russia, Ukraine, self-proclaimed Donetsk and Luhansk people's republics (DPR and LPR) and the Organization for Security and Co-operation in Europe (OSCE).

On Monday, Ukrainian President Petro Poroshenko said that French, German, Ukrainian and Russian had reached an agreement to reconvene the Contact Group in Minsk on December 24 and 26. The first round of talks took place on Wednesday, with prisoner exchange and relief of Kiev's economic blockade of DPR and LPR on the agenda.

The Contact Group on Ukraine has met twice in September in Minsk, resulting in a contested ceasefire agreement between the warring sides of the conflict.

Date of New Round of Minsk Talks on Ukraine in Process of Discussion: LPR

Date for Next Contact Group Meeting in Minsk Undetermined: DPR Envoy
The authorities of the self-proclaimed Luhansk People's Republic (LPR) have not yet confirmed the information about holding another round of talks of the Contact Group on Ukrainian crisis reconciliation in Minsk on Friday, the press-service of LPR's leader told RIA Novosti.

"At the moment, the date [of another round of Minsk talks] is not specified, its finalization is still in process," the press service said.

On Monday, Ukrainian President Petro Poroshenko said that leaders of Ukraine, Russia, Germany and France have agreed to hold a new meeting of the so- called Contact Group in Belarusian capital Minsk on December 24 and 26. The first meeting took place on Wednesday, with the date of another round of talks yet unclear.

Belarusian Foreign Ministry Confirms Minsk Contact Group Meeting
The Ukrainian media, however, reported Thursday that the next round of the Contact Group Minsk talks will be held on Friday, as it was announced by Poroshenko.

Igor Plotnitsky, head of the self-proclaimed Luhansk People's Republic said earlier on Thursday that the date of the new round of talks has not been set and additional discussions on finalizing it are being held.

The Contact Group, comprising representatives from Ukraine, self-proclaimed Donetsk and Luhansk people's republics (DPR and LPR), Russia and the Organization for Security and Co-operation in Europe (OSCE), have already met in Minsk twice: on September 5 and 19.

The talks resulted in a ceasefire agreement between the warring sides. However, both Kiev and independence supporters have repeatedly accused each other of violating the truce.