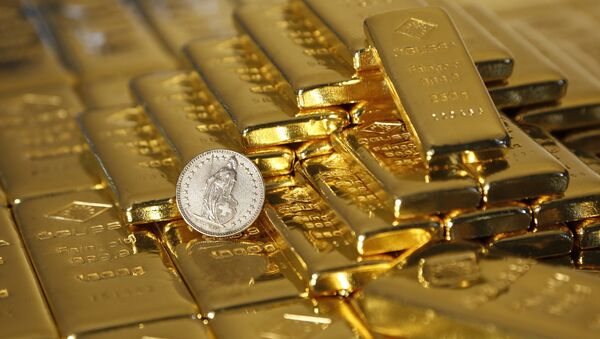 The recent accumulation of gold by Russia’s central bank has sparked a discussion on whether gold standard would be an appropriate monetary policy measure for the struggling economy.

MOSCOW, December 4 (Sputnik) — Russia’s Central bank has demonstrated an increased scale of gold-buying this year, triggering  diverse speculations both in the media and the expert community on whether it is a simple measure of supporting the price for the domestically produced metal, or part of a complex strategy in the economic standoff with the developed world. This way or another, there are voices suggesting its high time for Russia to introduce a gold exchange rate for the nation’s currency amid the prolonged ruble’s plunge in order to boost living standards, consumer demand and spur manufacturing sector.

West Drives Gold Prices Up by Printing More Paper Money: Advisory Group
The dollar- and euro-dependent Russia’s financial sector is struggling amid lack of hard-currency liquidity on domestic market triggered by the international sanctions and the dramatic decrease in oil prices. Most of dollar-denominated liquidity has been coming in Russia as petromoney, the rest being long-term loans, taken in the US or Europe. Now, as both sources of investment are drying out, the nation requires a radical shift in the monetary policy, which might be the remonetization of gold, in other words, introducing a gold exchange rate, Alasdair Macleod, a stock exchange and offshore banking veteran, suggests in his recent study.

Russia’s authorities have stated multiple times that one of their monetary objectives is to reduce dependence on the US dollar for its foreign trade. The recent depreciation of ruble by roughly 40% against the dollar has leveraged a heavy burden on Russia’s private sector, as its dollar-denominated debt amounts at $678.40 bln, according to Trading Economics’ data. One of the way of getting rid of the dollar for Russia is trading in local currencies with its partners, which it practices to some extent with China. However, as evidenced by the recent developments, this has not helped much.

Swiss National Bank Campaigned Against Gold Repatriation Referendum
Macleod suggests that ruble’s FX rate might be pegged to gold at a current price of 60,000 RUB per ounce of the precious metal. As Russia’s foreign reserves amount at $429 bln including the $45 bln in gold, with a budget deficit of $10 bln (less than 1% GDP), the nation is maintaining a healthy fiscal discipline. This means the gold exchange rate is possible in Russia and it will work as long as the nation keeps its moderate pace of debt accumulation.

The implementation of the gold standard, according to Macleod, will allow for curbing the consume inflation (amounting at 11.5% year-on-year in food prices at this point). Lower inflation will spur investment. The gold exchange rate will also change Russia’s relationships with other nations. The implementation of gold standard in Russia will challenge the fundamentals of the current system of global monetary management and mark a partial return to the norms of the Bretton Woods system, effectively reversing the consequences of the Nixon shock.

Gold Repatriation From US to Result in Higher Gold Prices, Weaker Dollar
The new system of monetary management would end the dollar’s domination in international payments and divide global currencies in two camps: those returning to the commodity-backing of the money, and those, unable or unwilling to do so. The main criterion would be the fiscal factor, as nations with too much budget spending will not benefit from tying their currencies to gold. These include the dollar, euro, yen, pound sterling. Other nations, free of excessive indebtedness, Macleod argues, could successfully implement the gold standard.

However, one would have hard time finding a nation, fiscally sound enough for the gold standard. China, being a good match at first sight, guarantees all of the indebtedness of its provincial governments, which amount at $1,8 trln in mid-2013, according to the Economist. Businessweek reported this January China’s debt of provinces, counties and townships amounted at $2.96 trln. Russia’s corporate debt exceeds its total amount of foreign reserves, meaning a default on the debt will bee required before the implementation of the gold standard. However, such measure would invoke disastrous implications for the economy, far outweighing the benefits of the peg to gold. India and Brazil have $376 bln and $428.3 bln in international debt, respectively.  Of all the nations the gold standard would be perfectly appropriate for only a few nations, among which are Republic of China in Taiwan, Singapore, Macau and Liechtenstein, free of external debt burden.