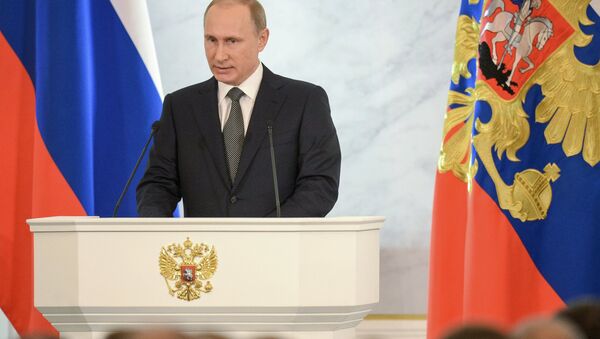 Russia has always regarded Ukraine as a "brother nation" and respects its sovereignty, President Putin said.

Putin: No Way Can Seizure of Power, Mass Killings in Odessa Be Endorsed
MOSCOW, December 4 (Sputnik) — Russia has always supported Ukraine as a "brother nation", and this position will not change, Russia's President Vladimir Putin said during his annual address to the Federal Assembly Thursday.

"It is well known that Russia has not only supported Ukraine and other 'brother republics' of the former USSR in their seeking sovereignty, but also has contributed significantly to this process in early 1990s. Since then, our position has not changed. Each nation has an inalienable right to its own development path," Putin said in his address.

Putin also claimed there is no way to support armed seizure of power in Ukraine and violence, referring to the Odessa massacre.

"Yes, we have discussed the coup, seizure of power in Kiev in February. And what we see now in Ukraine, the tragedy in the southeast totally confirms our position is correct. How in this connection can we support the armed seizure of power, violence, and murder?" Putin continued.

Putin emphasized that Moscow will not yield to pressure of the West in the situation around Ukraine and will continue focusing on the legitimate settlement of the dispute.

Western countries have repeatedly accused Russia of meddling in Ukraine's internal affairs and backing independence supporters in southeastern regions, though none of the statements were supported with any evidence. Russia has repeatedly denied its role in the inner Ukrainian conflict.

Following a February coup in Kiev, pro-federalization rallies have been raging in Ukraine's east after its residents refused to recognize the coup's results.

New Yorkers Commemorate Odessa Tragedy, Call for US to Stay Out of Ukraine
In mid-April, Kiev launched a military operation against independence supporters in the country's southeast, predominantly Russian-speaking region, which led to a desperate humanitarian situation there.

In May, clashes in the city of Odessa killed 48 people and injured over 200. Most of them died when Right Sector gunmen blocked anti-government protesters in the House of Trade Unions and set fire to the building.

In September, the warring sides reached a ceasefire. However, since the establishment of the truce, the sides have accused each other of numerous violations.