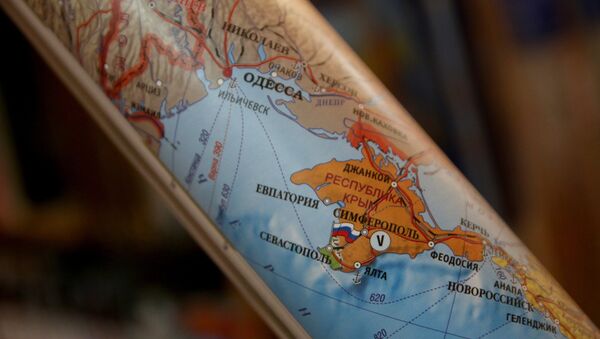 © Sputnik / Andrey Iglov
/
Go to the mediabank
Subscribe
International
India
Africa
According to the report, 90 percent of Russians approve the government’s decision to readmit Crimea into Russia.

PHOTO: Russian Airbase in Crimea Reinforced by New Fighter Jets
MOSCOW, November 28 (Sputnik) – Ordinary Russians’ widespread support for Crimea’s reunification is seen as a vote of confidence in Russian President Vladimir Putin, whose approval rating has maintained record levels, according to a report by the Civic Chamber of the Russian Federation.

"Support of Crimean reunification became a kind of an absolute Russian society 'vote of confidence' to Russian President Vladimir Putin, whose rating started skyrocketing in January 2014. In June it reached maximum mark of 86 percent since the year 2000. This indicator stayed practically unchanged until the end of the year," – the report states.

According to the study, 77 percent of Russians attribute the destabilization and bloodshed in Ukraine to the US, considering them to be responsible for provoking the conflict.

After a new government came to power in Ukraine, residents of some regions refused to recognize its legitimacy. In March, residents of Crimea held a referendum, which resulted in the republic's secession from Ukraine and reunification with Russia. In April, residents of Donetsk and Luhansk in eastern Ukraine established people's republics that later declared independence.