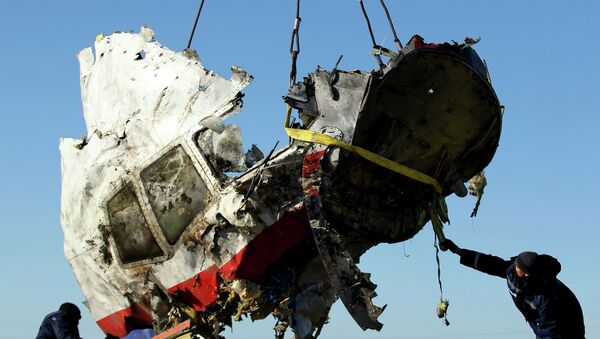 An amateur image allegedly showing the last moments of MH17 flight needs to be checked for authenticity before making any conclusions, a Russian civil aviation official said Friday.

“I saw the image, but I don’t want to comment on it. It requires additional analysis to confirm or disprove its authenticity,” Rosaviatsiya deputy head Oleg Storchevoy said.

The Malaysia Airlines Boeing 777 flying from Amsterdam to Kuala Lumpur, crashed in the Donetsk region on July 17, killing 298 people, including 283 passengers and 15 crew members.

In early September, an international investigative team headed by the Netherlands published a preliminary report, which said the tragedy had been caused by large number of objects penetrating the aircraft from outside. The inquiry will proceed until August 2015, before the final conclusions are made.

Moscow Ready to Cooperate With MH17 Investigators on All Issues

Russia is ready to cooperate on all issues with the international commission investigating the crash of Malaysia Airlines flight MH17 in eastern Ukraine, the deputy head of the Russian civil aviation authority said Friday.

Investigating the Tragedy: Dutch Experts Clearing MH17 Crash Site
"We have consistently stressed our full readiness to cooperate with the commission on any issues that emerge," Rosaviatsiya deputy head Oleg Storchevoy told journalists.

"However, our cooperation appears to be one-sided at the moment: they request our data, we provide it, but we get no information in return. We have not been invited to participate in joint work and, in fact, we have learned all the news from open sources," he went on.

The official said that Russia has been preparing another package of documents requested by the commission.

In July, the Malaysia Airlines aircraft en route from Amsterdam to Kuala Lumpur crashed in eastern Ukraine. All 298 people on board – 283 passengers and 15 crew – died in the crash.

In September, the Dutch Safety Board released a preliminary report, according to which the plane most likely broke up in mid-air as a result of structural damage caused by a large number of high-energy objects penetrating the aircraft from the outside.

The Kiev authorities accused independence supporters in eastern Ukraine of shooting the plane down, but has failed to provide the evidence to support the claim. The independence fighters denied the allegations saying they were not in possession of weapons capable of shooting down a plane flying at 32,000 feet.

During the Asia-Pacific Economic Cooperation (APEC) summit in Beijing last week, Russian President Vladimir Putin expressed hope that all data concerning the plane crash would eventually be made public.