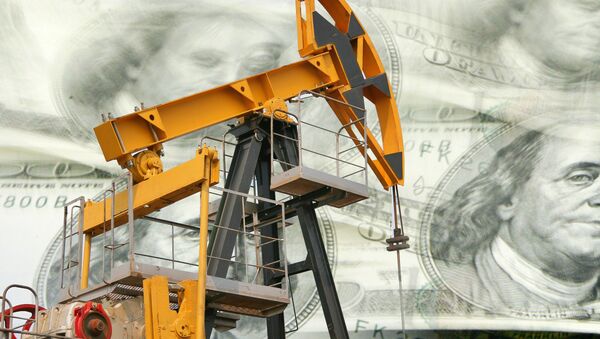 US shale oil producers and Saudi Arabia find themselves in a desperate competition in the shrinking oil market, driving oil prices down.

Several major US oil-producing enterprises including Oklahoma-based Devon Energy, Continental Resources and Texan company EOG Resources have announced plans to boost oil production in their most lucrative oil fields, while lowering extraction from their least profitable assets, as reported by Bloomberg. This means that US oil production in the short-to-medium-term will continuously increase, contributing to the ongoing slump in global prices.

Such a decision has exacerbated concern from the OPEC oil-producing syndicate, formally led by US key ally Saudi Arabia. The gravest disturbance was expressed yesterday by Venezuelan President Nicolas Maduro in a televised address, as reported by CNBC, who said he was calling on fellow OPEC members and non-OPEC oil producers to hold multilateral discussions regarding the possibility of cutting extraction in order to push oil prices up. The next OPEC meeting is to be conducted in Vienna on November 27, but Maduro said he is offering an additional discussion prior to the event.

This coincided with Venezuelan FM Rafael Ramirez’s tour of oil-producing nations, including Russia and the Gulf states.

“There’s a lot more production coming online this year and in the first half of 2015,” Jason Wangler of Houston, TX-based Wunderlich Securities Inc. said of the US oil extraction situation, as quoted by Bloomberg. “This isn’t a machine that you can turn on and off with a switch. It’s going to take months, if not quarters, to turn it around.”

US domestic oil production exceeded 9 mln barrels per day (bpd) in the first week of November for the first time since 1983, according to data by the US Energy Information Administration.

The Venezuelan initiative is unlikely of gain traction from OPEC due to Saudi resistance. As oil prices fall further, nations that ship oil by tankers find themselves in tough competition for their share of the shrinking oil market. China’s economy is slowing and therefore demands less oil. Near-zero growth in Europe and the EU’s initiative to decrease dependence on fossil fuels have undermined Europe’s oil consumption, while Japan, now technically in recession, requires less oil not only due to economic turmoil, but also thanks to its gradual return to nuclear energy.

Now, the one who first cuts production will lose their precious share of the scarce market.

“We’re in a battle with Saudi Arabia with regard to market share versus U.S. shale oil,” Scott Sheffield of Pioneer Natural Resources said as quoted by Bloomberg.

While Saudi Arabia is acting as a more solid market participant, the situation within the US is even more complicated because different oil-extracting companies have to compete against one another, which forces them to drill more wells, pump quicker and deliver faster. US oil production is skyrocketing exponentially for this reason.

Another factor affecting oil prices is Iran. The deadline for a nuclear deal is set on November 24, and in case the last round of negotiations is a success, international sanctions will gradually be relieved, meaning Iran will supply even more oil to the global market against ever-shrinking demand. However, analysts at Citi say OPEC export cuts are more likely than an Iranian nuclear deal at this point. But next  week’s outcome may prove them wrong.

Meanwhile, Russia’s FM Anton Siluanov told Bloomberg Russia will slide into recession in 2015 in case oil falls below $60 a barrel.

“Recession is inevitable in 2015 if the situation worsens,” Siluanov told Bloomberg. “If the oil price declines to $60 per barrel, the economy will have negative growth.”

“We’ll have to take a more strict approach to the budget and use all our crisis-fighting tools,” Siluanov said. “We’ll have to adjust our budget strategy and review priorities.”